Posted in Around the Garden, Gardening Tips on March 29 2012, by Daniel Atha

Daniel Atha is an Associate Editor of NYBG’s systemic botany journal, Brittonia, and a researcher with specialties in floristics, taxonomy, and economic botany. He has also taught classes in anatomy and systemics at the Garden’s School of Professional Horticulture and is currently working on a project to develop identifying DNA barcodes for plants of the Northeastern United States.

Certain plants have a poor reputation, one that isn’t always deserved. And in the case of this particular “weed,” the old adage stands that if you can’t beat ’em, join ’em:

This is a direct quote from Wikipedia: “… this plant is common in gardens, fields, and disturbed grounds. Control is difficult due to the heavy seed sets. Common Chickweed is very competitive with small grains, and can produce up to 80% yield losses among barley. [It] is edible and nutritious, and is used as a leaf vegetable, often raw in salads. It is one of the ingredients of the symbolic dish consumed in the Japanese spring-time festival, Nanakusa-no-sekku.”

Somebody should tell the barley farmers that the chickweed they’re nuking with herbicides is actually the perfect antidote to the weight-inducing and intoxicating barley we eat and drink too much of.

This is one of my favorite wild food plants because it is so mild, so widespread, and so long-lasting. Available nearly everywhere there are people, it’s never bitter, has no disagreeable aftertaste and is growing pretty much every day of the year–even here in the northeast. Down south you’re lucky to find it on the shady side of a barn during a rare cool August, but if you’re below the Mason-Dixon line between November and May, you’re in chickweed heaven. 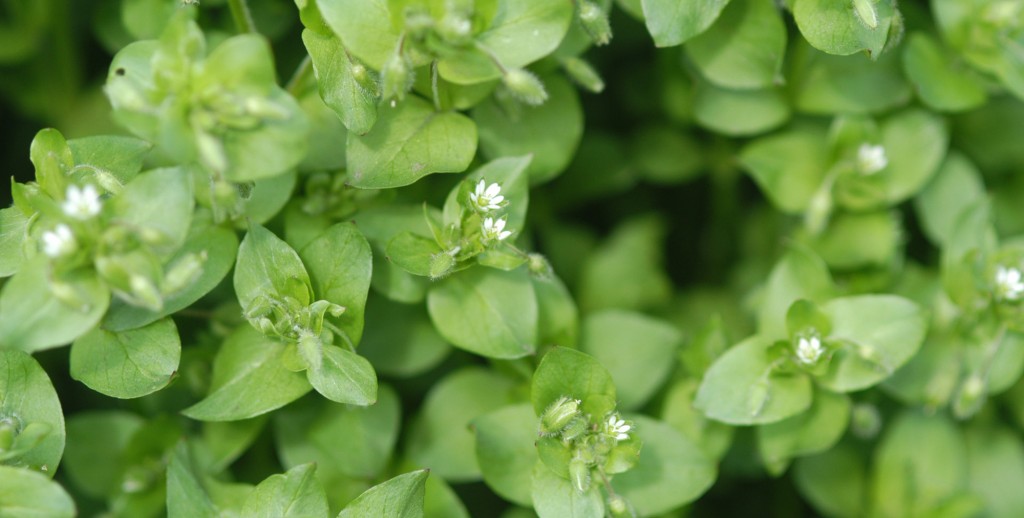 It gets its name because birds–especially chickens–love it. They eat the stems, leaves and even the seeds. It also has a long tradition of promoting weight-loss (in humans). I wager that if you ate a belly full of chickweed (or any other wild herb for that matter) every time you felt hungry, you couldn’t help but lose weight.

Chickweed is higher in iron and zinc than any of our domestic greens and it contains significant levels of potassium and several other essential minerals. It has scores of medicinal uses dating back to the Middle Ages. Prevention is the best medicine of all, so I just eat it raw as often as I can. I try to find a large, leafy mound, grasp a handful and cut off the top few inches with scissors, then eat it right out of hand or carry it home for salads, garnish, or a light sauté. 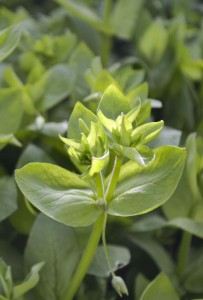 Native to the Old World–exactly where is not clear–chickweed has spread across the globe, just like us. It’s one of several plants archaeologists call a “camp follower” because it signals that humans spent more than a little time in that spot. Even today, its presence in what otherwise might seem like pristine woods says that those woods are anything but.

It grows best in loose, well-drained, loamy soil in full sun to light shade. One slender tap root supports a whole mass of weak, tangled stems, either reclining on the ground or weakly lounging on nearby plants. Look closely. Each stem internode (section between leaves) has a thin line of pale hairs that alternate from one side of the stem to the other on successive nodes. The small, egg-shaped or oval leaves are opposite and always spaced a few inches apart. The tiny white flowers produced in the upper leaf axils consist of five petals, each divided nearly to the base (and thus looking like ten petals). The capsular fruits contain numerous tiny seeds.

Of course, chickweed is just one of the many overlooked edibles growing in New York and elsewhere. Check in with Plant Talk later on as I continue to explore the often ignored plants that might go well with your next salad. And remember: botanical friends are friends for life. Otherwise, it’s best never to eat a plant you don’t know.

For a hands-on course in the edible weeds so seldom appreciated at the kitchen table, join us for “Edible Weeds of the Northeast” on May 30. Be sure to check out our Adult Education offerings for similar courses coming later in the year.

It is everywhere! If people only knew what is right under their noses. Chickweed salad! Yum. Lose weight too — I wonder if the gardeners in Fort Tryon Park will be willing to part with the chickweed they are always pulling out.