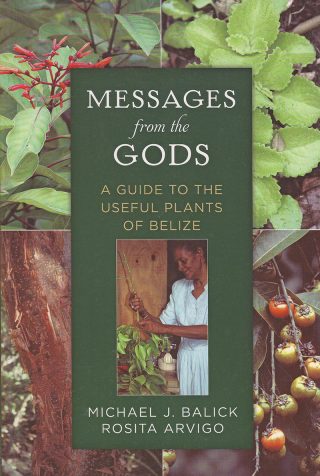 Messages from the Gods: A Guide to the Useful Plants of Belize, by NYBG’s Michael Balick, Ph.D., and Rosita Arvigo, D.N., is the winner of the 2018 Mary W. Klinger Book Award, which is given annually to an outstanding book in the fields of economic botany and ethnobotany.

The culmination of a research project that began in 1987, Messages from the Gods is both a cultural study and a specialized field guide, with information about native and introduced plants in Belize and their traditional and contemporary uses as sources of food, medicine, and fiber and in spiritual practices, among many other purposes. The Society of Economic Botany—the preeminent professional association of researchers who study the relationships among plants, people, and culture, which presents the annual Klinger award—recognized the book as a definitive resource with a breadth and depth of knowledge “that will serve as a primary source on the plants of Belize and their uses for many generations.”

“This book is a truly significant volume that culminates decades of close collaboration between the two authors and local experts in Belize who practice and teach plant-based medicine and crafts and who promote the conservation and appreciation of that country’s diverse array of plant species, ecosystems, and human communities,” said Gayle Fritz, Ph.D., the President of the Society for the last year.

Messages from the Gods was co-published by The New York Botanical Garden and Oxford University Press.

“This book on the useful plants of Belize is authoritative in content and beautifully illustrated with color photographs and line drawings, said Brian Boom, Ph.D., NYBG’s Vice President for Conservation Strategy and Bassett Maguire Curator of Botany, who is the Director of NYBG Press. “But it is more than a guide book in that it features profiles of the principal healers and bushmasters who contributed to the book and includes reflections by some of the healers in their own words.”

The Belize Ethnobotany Project began in 1987 as a collaboration between Dr. Balick, who is NYBG’s Vice President for Botanical Science and Director and Philecology Curator of the Institute of Economic Botany, and Dr. Arvigo, a doctor of naprapathy who is dedicated to studying and preserving the traditional Maya healing practices of Belize.

At the time, the flora of Belize and the uses of its plants were poorly documented. The project involved fieldwork that extended over 18 years and allowed the investigators to explore more than 220 different localities in Belize and make over 8,000 plant collections. Individual specimens from the project account for about 18 percent of the holdings of the Belize National Herbarium, and a complete set is preserved in NYBG’s William & Lynda Steere Herbarium. Over three dozen NYBG scientists and graduate and undergraduate students participated in collecting plants in Belize or identifying specimens. Many other individuals affiliated with NYBG, including members of the Board of Trustees, visited Belize or were involved in processing and photographing collections, preparing illustrations, curating specimens, and databasing information, all of which was necessary to produce Messages from the Gods.

“This award recognizes the dedicated labors of over 200 local people, international researchers and volunteers who devoted their time and energies to documenting the rich biocultural diversity of Belize,” Dr. Balick said. “Rosita Arvigo and I are very grateful for their commitment, which has been acknowledged through this award. This is an example of the benefits of NYBG’s long-term commitment to research and conservation of critical habitats in many areas of the world, carried out by our scientific staff. ”

As part of the Belize project, Drs. Balick and Arvigo previously published Rainforest Remedies: One-Hundred Healing Herbs of Belize, about the use of plants for primary health care, and the NYBG Press published Checklist of the Vascular Plants of Belize: With Common Names and Uses, an inventory of the local flora by Dr. Balick, Michael Nee, Ph.D., and Daniel Atha. These references serve as important resources that support the ecotourism industry in this conservation-oriented nation.