Welcome to the African American Garden at the Edible Academy. All gardens are special spots: a visit may be a leisurely stroll, a quest for information, or a search for memory. This garden was created to provide all three and more—to inspire thought, and to give you a brief look at the history of the African American experience in the United States through the lens of plants.

Explore the African American Garden and the species planted here with this interactive map.

The garden walk begins with plants such as cotton and sugar cane, rice and tobacco, which were the commodities driving the Trans-Atlantic Slave Trade that brought many Africans to these shores to work in the fields. The garden’s story continues with plants such as okra, tomatoes, eggplants, peppers, and various types of greens that turned up in kitchen gardens and on tables throughout the American South and North. Plants that were used to create, like the seagrass woven into baskets, gourds that became containers, and indigo that dyed garments make an appearance, as do plants that were used to cure ailments from fever to toothaches. There are plants that were foraged in the wild and became domesticated standbys, and even some plants that were central to traditional rituals and religious rites. The garden walk ends with several African plants and some that substituted for them in the North American context, a reminder that the African American world of plants, like African life in the North American world, was one of adaptation and transformation.

The plants in the garden give a curated glimpse at the diverse world of African Americans and the geographical context that is the United States. The final bed that celebrates substitutions and replacements is anchored by a bottle tree. In the southern United States, especially in the Carolina and Georgia Lowcountry, bottle trees are fixtures in many African American gardens; they are designed to protect the garden and its surroundings.

A visit to the African American Garden is enhanced by a poetry walk around its perimeter curated by Dante Micheaux of the Cave Canem Foundation. The New York Times has called Cave Canem, “A major incubator for the current renaissance in Black poetry” and in contemplating the words of its poets, visitors can add another layer to their appreciation the garden.

On select days, visitors can avail themselves of red drinks at the hibiscus drink stand, enjoying various versions of a traditional celebratory African American beverage. And every day, visitors can sit, catch some shade, relax, and simply enjoy the garden at one of the tables and umbrellas designed by scenic designer, Lawrence E. Moten III.

Whether you come for a brief walkthrough or decide to spend an afternoon, welcome to the African American Garden. We are very glad you are here.

The African American Garden’s poetry walk was curated by Dante Micheaux, poet and program director of Cave Canem, an arts organization created to cultivate the artistic and professional growth of African American poets. 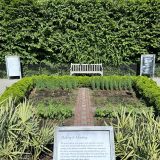 The African American Garden is made possible with support from the Mellon Foundation.