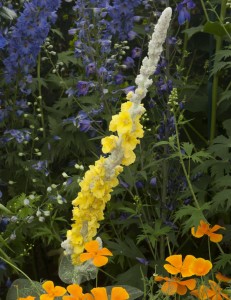 Yes, it’s a weed, it’s a biennial, and it’s called mullein (Verbascum bombyciferum). So many visitors asked me about this plant during a recent Conservatory tour of Monet’s Garden that, as soon as I got home, I went straight to the computer to look up more information.

When it comes to weeds, as Ralph Waldo Emerson once said, “A weed is a plant whose virtues have not yet been discovered.” And it seems Monet’s keen eye was quick to see those virtues in mullein, especially when its wooly, whitish leaves were placed near the foliage of poppies.

The Puritans brought this so-called weed to America, but the species is native to Turkey and the Mediterranean regions of Europe and Asia. It has a long history as a common herbal remedy for coughs and other respiratory ailments. A great (but unconfirmed) story also suggests that Roman ladies used a tincture of mullein flowers as a hair dye to cover gray, and as a “blusher.” And according to Vivian Russell, author of Monet’s Garden: Through the Seasons at Giverny, commonplace plants like mullein were favorites in Monet’s spring garden.

“Monet encouraged [mullein] particularly in the paintbox bed under his clematis frames, where they grew beside the grey, sword-like foliage of the faded irises in a satisfying textural contrast,” writes Russell. 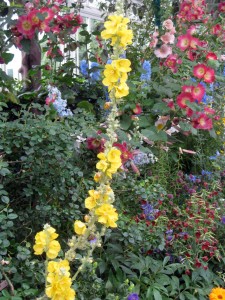 Some Monet commentators note that the artist liked to plant mullein because of its informal, wild effect and self-seeding habits. He definitely used a variety of plant heights throughout the seasons and mullein tended to bloom for a long period, sometimes rising to seven feet, so it’s hard to miss!

So, while it may have taken the eye of the master Impressionist to see it, even this “weed” can have a place in the garden. And history certainly proves that it has an abundance of virtues after all. Each exhibition held at The New York Botanical Garden seems to have its stand-out, some more unexpected than others. For the Orchid Show, it was the medinilla. And for Monet’s Garden, it’s none other than mullein.

Thank you for this detailed info. IT,S my favorite Too!

Weed to some, wildflower to others. Either way, bees & butterflies love it. Mullein is an important food source for pollinators.
Also, in olden times they were dipped in wax & used as a torch. How many plants can one do that with!