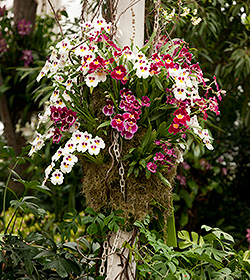 
Kevin asked visitors for their favorite part of the exhibit, and even spoke with Jimmy Kenny and the Pirate Beach Band, the musicians whose “trop-rock” completes the Floridian experience. Come enjoy the tropical tunes and more at the Orchid Show!

Reading PLANT TALK is part of my morning routine…enjoy looking at the photos and learning new things.

Kevin Character is so personable and has such screen presence.

It was such a thrill to see good friends Peter and Susan in the video. We originally met through your FLICKR group and really enjoy sharing experiences at the NYBG both during and after frequent visits.

This year is even better than before if that is possible. The colors of the architectural detail are so vibrant. The plant groupings seem so natural and perfectly styled. And, there were so many new bromeliad species to complement the orchids which seem more magnificent and profuse than ever.

Your staff is so friendly and helpful!

Everything about the members day was perfect – this was my first visit for a pre show.

Can’t wait to go back.