Advances in Botany Call for Update of Regional Manual 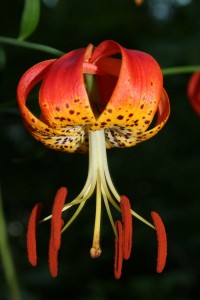 Since its founding in 1891, The New York Botanical Garden has been a center of scientific study of the plant life of northeastern North America. Generations of Garden scientists have been active in writing books that aid in the identification of plants that grow spontaneously within this vast region, which extends from Nova Scotia west to Minnesota, and south to Virginia and northern Missouri (more than 25 percent of the area of the contiguous United States). This region hosts about 5,000 species, including many that are essential for a healthy environment, economically important, and quite beautiful, such as Lilium superbum (turk’s-cap lily, pictured here).

The most recent book on the subject is Manual of Vascular Plants of Northeastern United States and Adjacent Canada by Henry A. Gleason and Arthur Cronquist (1991, The New York Botanical Garden Press; also available electronically). Professors, students, land managers, conservationists, and gardeners universally regard it as an indispensable reference. Advances in botany since 1991 have made a major revision of the Manual an obvious necessity.