Brazil Nuts Are Seeds, Not Nuts!

The Brazil nut is known to most people as the largest nut in a can of mixed party nuts, but other than that, most people know little about it, including that it comes from an Amazonian rain forest tree of the same name or that it is really a seed, not a nut.

The Brazil nut was first discovered by Alexander von Humboldt and Aime Bonpland on the Orinoco River in Venezuela and made known to the scientific world as Bertholletia excelsa in1808. The generic name honors a famous French chemist and friend of Humboldt’s and excelsa refers to the majestic growth form of the tree. Although discovered in Venezuela, this species became known as the Brazil nut because Brazil was, and still is, a major exporter of the seeds.

For the past 35 years my research has focused on the classification and ecology of species of the Brazil nut family. The Brazil nut itself is only one of what I estimate to be about 250 species of that family found in the forests of Central and South America. This number includes nearly 50 species that do not have scientific names, mostly because collectors are usually not willing to climb into tall trees to gather the specimens needed to document their existence. My research on the Brazil nut family has taken me on many expeditions to the rain forests of the New World, and what I have learned about this family of trees can be found on The Lecythidaceae Pages. 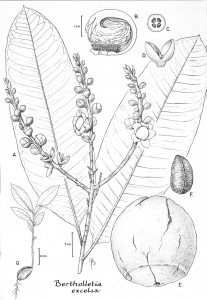 The Brazil nut flower is large, roughly two inches in diameter, and fleshy, and the male part of the flower has a structure not found in any other plant family in the world. (See illustration at right by Bobbi Angell.) The fertile stamens are arranged in a ring that surrounds the style at the summit of the ovary. This ring has a prolongation on one side that is expanded at the apex to form a hood-like structure. At the apex of the hood are appendages that turn in toward the interior of the flower.

A small amount of nectar is produced at the bases of these appendages. The fleshy “hood” presses directly onto the summit of the ovary and the six petals form an overlapping “cup” that blocks entry to the flower to all but the co-evolved pollinators.

The Brazil nut is known to be pollinated only by large bees with enough strength to lift up the hood and enter the flower. These bees are presumably rewarded for their efforts by the nectar they collect from the interior of the hood. When the bees are in the flower, pollen rubs off onto their heads and backs from where it is transferred to the stigma of subsequent flowers visited.

For the most part, a Brazil nut tree cannot fertilize itself so the bee pollinators are needed to carry pollen from one tree to another. This is an example of a biotic interaction in which both the bee and the tree benefit—the former is rewarded with a nectar meal and the trees end up producing seeds.

At maturity, the round, woody fruits the size of cannon balls fall to the ground with 10 to 25 edible seeds about 1.5 inches long trapped inside. In botanical terminology, a nut is a kind of fruit so this is why the Brazil nut would have been more appropriately named the “Brazil seed.” 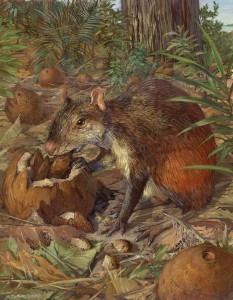 The fruit walls are chewed open and the seeds are removed and carried away by agoutis (rodents about the size of a cat; see illustration at left, Copyright, Michael Rothman, 2005) and less frequently by squirrels. Because the seeds are trapped inside the thick, woody fruits and because the boney seed coats are difficult to open, only animals with sharp teeth or a strong bite are able to consume the seeds. The agoutis and squirrels eat some of the seeds and cache others for future consumption. Some of the cached seeds are forgotten by the animals, and it is these seeds that may germinate and grow into the next generation of trees. Once again, the animals and the trees benefit, the former get a meal and the latter have their seeds dispersed to an area where they have a better chance growing into adult trees.

The Brazil nut is a non-timber forest product that provides income to the Amazonians that harvest it for food. The harvesting of Brazil nuts has long been cited as a prime example of how human economic activity can provide income for people and protect biodiversity of tropical forests at the same time. However, a study by Carlos Peres and colleagues have demonstrated that continuous harvesting of Brazil nuts over long periods results in Brazil nut groves without juvenile trees; thus, there will be no replacement by younger trees when the older trees senesce and die. We continue to learn that tropical rain forests are so complex that every time they are exploited by humans they suffer negative impacts to their ecology and diversity.

Please help support the important botanical research, education, and programs that are integral to the mission of The New York Botanical Garden.