Traveling Exhibition Opens Next Week at the Garden 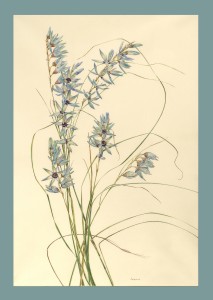 An organization of artists and illustrators who depict plants, the American Society of Botanical Artists (ASBA) began a project in 2006 to tell two stories: the continuing relevance of botanical art and the often neglected story of plant endangerment, as the decline of the world’s plant life is one of the most significant issues of our time. The result is the traveling exhibition Losing Paradise? Endangered Plants Here and Around the World, which opens at The New York Botanical Garden Thursday, May 6.

Artists from around the country and the world worked to capture the threatened and endangered plant life in their neighborhood or farther afield over the course of about three years (such as the image above
© Jean Emmons, Ixia viridiflora, Green Ixia, watercolor on vellum). This project has encouraged ASBA members to learn about today’s endangered plants, to depict more of them, to grow relationships with people involved in studying and conserving them, and to develop ethical field study techniques. Endangered plants are by definition difficult to find, and in some cases, excellent orienteering skills are needed. Once found, they sometimes require multiple years of study for a completely accurate depiction. Collaboration with scientists, conservationists, and botanical gardens bridges the disciplines of art and science and enriches both. 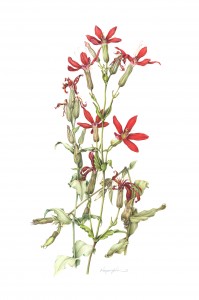 More than 40 works of art and some of the most exciting plant discoveries of recent years are in the exhibition and catalog (such as Wollemi pine and Phragmipedium kovachii) as are some of the most endangered gems of North America (such as lakeside daisy and dwarf bearclaw poppy). We hope you find that these artworks (such as the image at left
© Heeyoung Kim, Silene regia, Royal Catchfly, watercolor) and the stories of the plants they depict enrich your understanding of the value of botanical artists and of plant diversity and endangerment.

We are especially excited to have the exhibition on view at The New York Botanical Garden, our new home. Thanks to the generosity of the Garden, our offices are now located in the Watson Building, allowing the ASBA to be in the middle of all things botanical, including the Garden’s Botanical Art and Illustration program, the longest-running such program in the country. The Botanical Garden has one of the world’s deepest plant research programs, sending scientists around the world to learn about plant populations. We feel it is especially fitting that our exhibition is hanging here, in a place with such a continuing understanding of and commitment to our world’s precious plant life.

Losing Paradise? Endangered Plants Here and Around the World will be on view in the Arthur and Janet Ross Gallery at The New York Botanical Garden from May 6 to July 25. An opening reception will be held May 6 from 5:30 to 7:30 p.m. Please RSVP to Courtnee Bass, cbass@nybg.org or 718.817.8767.