How Do Insects Feed on this Plant with Sticky White Latex?

When I was in graduate school I decided to turn my East Village community garden plot over to the insects. I was an NYBG/CUNY Ph.D. candidate hoping to study plant-animal interactions. By happy accident I ended up in an entomology course at the American Museum of Natural History. The revelation that plants produce a huge variety of chemicals capable of manipulating insect behavior captured my imagination, so I planted six native species: three milkweeds (Asclepias) and three goldenrods (Solidago) to attract specific beetles. 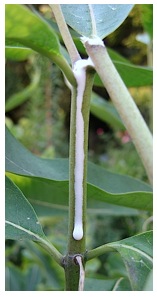 Fifteen years later, one goldenrod species is still hanging on, but common milkweed (Asclepias syriaca) is clearly the winner—and it’s now making furtive advances into neighboring plots (the original plant probably spread by underground rhizomes). My observations have convinced me that the common milkweed is anything but common!

Plants in the genus Asclepias are called milkweeds because of the sticky white latex that pours out of wounded tissues. Asclepias latex is rich in toxic cardiac glycosides, and the scientific genus name comes from Asklepios, the ancient Greek physician.

Some milkweed-feeders actually sequester the toxins to defend themselves from predators, but how do they avoid getting their mouthparts hopelessly gummed up? Some slice right through leaf midribs, which diverts the latex flow and enables the “trencher” to feed downstream of the cut. For a video clip of the best-known trencher, the monarch caterpillar, click here. 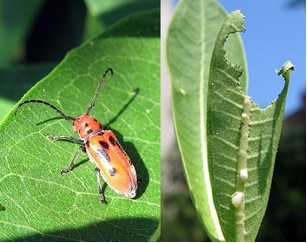 Monarchs are hardly the only diminutive engineers to exploit milkweeds: a four-eyed milkweed beetle (Tetraopes tetraophthalmus) is shown left with its recently trenched leaf.

The large milkweed bug, Oncopeltus fasciatus, may simply avoid milkweed lactifers (networks of living, latex-bearing cells). It has, like other true bugs, mouthparts modified for piercing and sucking, and appears to feed largely on phloem sap. 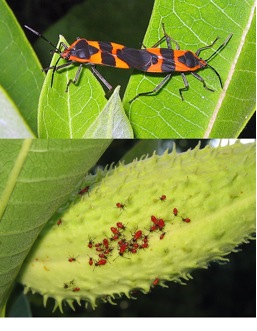 Both adults and nymphs are principally seed-feeders, but adults probably also consume the amino acid-rich nectar that accumulates in corona “cups.” Nectar is hardly intended to sate seed predators—but any plant that sets forth a feast will attract some unwelcome guests! Floral nectar is, of course, a reward for potential pollinators, and milkweeds have a strategy to thwart (some) insects that would indulge without rendering service. Pollen is bundled into sacks called pollinia, which are tucked into slits in a flower’s central column. 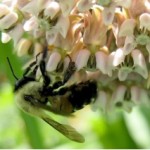 Nectar-feeding insects get their feet stuck in the slits; if they are sufficiently strong they can pull them free—often encumbered by pollinia that can be deposited at the next flower. If, however, the insect is too weak to withdraw its legs, a ghastly fate awaits… 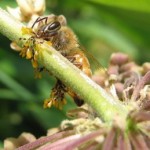 Non-native honeybees, Apis mellifera, are effective pollinators—but clearly even a honeybee can have too much of a good thing.

Some people may consider milkweed a pernicious weed… but I prefer to think of it as a keystone species!