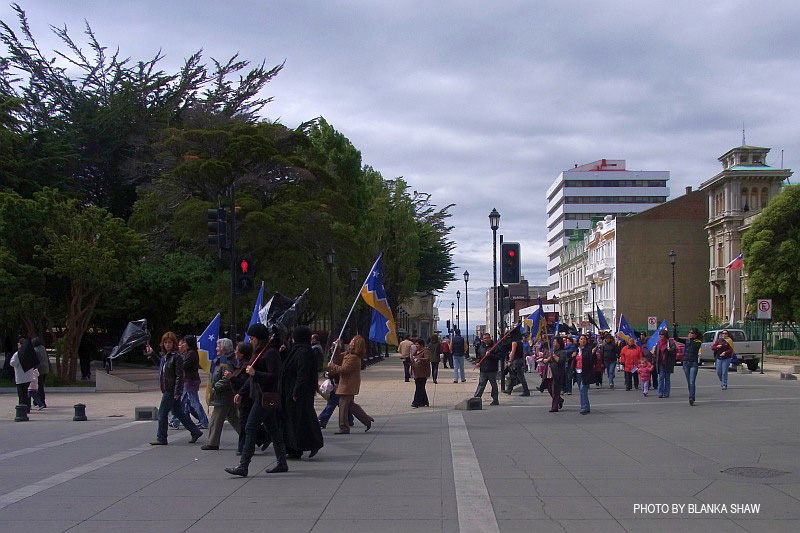 Say hallelujah! On Sunday evening the barricades were lifted temporarily and I was able to get my luggage. Ah, the joys of clean clothes! The barricades were opened at about 7 p.m. and thousands of people flocked to the airport. However, the road to the airport was only to be open until 9:30 p.m., and the road from the airport (it is a divided highway) only until 11 p.m. So, Juan and Ernesto took advantage of the window and went to the airport to get not only my luggage but also their own. They were able to get my luggage and Ernesto’s, but Juan’s was locked in the DAP Airline office and no one was there from that airline. Fortunately, Juan only had collecting equipment there, and not his clothes. So, we are able to collectively provide him with what he needs.

On Monday, the protests continued, only growing larger. However, most stores opened, so we took advantage of it and did what little shopping we needed to do. The most interesting experience was when we went to a department store to buy pillows for our bunks on the ship. I had decided bringing a pillow was too bulky and easier just to buy here. We went to the bedding department and were told they were out of pillows. However, all the beds on the floor were made and had pillows on them. I pulled a pillow out of the pillow case and said that this was just fine with me. The sales person shrugged and led me to the cash register. Both Jim and Blanka followed suit and they bagged up our pillows. When I asked how much they were, he said they were free, a “souvenir” for us! So, they were out of pillows to sell, but what pillows they did have were free. Can you see that happening at Macy’s?!

As the protests in town continued to grow in size and intensity, they remained completely peaceful. The new Minister of Energy flew into town (he got to the city by helicopter since the road was still blocked), but only negotiated in private with government-appointed officials, completely excluding the elected assembly. Needles to say, this was not popular with the masses.

This morning, however, representatives from the mayor’s office and from the U.S. consulate were in our small hotel dining room. At the end of their session the American announced to the 10 people or so having breakfast that an agreement was near and to wait to travel until it was settled. We didn’t know if this was just unfounded optimism or reality Fortunately, we are not tied to public transportation and still intended to leave Wednesday

Right after breakfast, Juan, Ernesto and I went to meet with the ship owner and its captain. I showed them maps of where we hoped to go to collect, with the understanding that access would be dependent on sea and weather conditions. I was shown which sites were accessible in any weather, and which only with calm seas. Because the entire area is so poorly collected, almost any site would result in interesting collections, and so we are prepared to be completely flexible. Fortunately some of the most desirable sites–those near glaciers where humidity is high and epiphytes are more abundant–seem to be accessible even in bad weather. So, we are set to leave tomorrow. Because the seas are rough this afternoon, the ship will not be put into the water until Wednesday morning and then we’ll leave in the early afternoon.The anticipation is building!

As soon as we got back to town we heard an agreement had been signed to end the protests. The local people insisted that the agreement be in writing since previous verbal agreements had been broken by the president. The government agreed not to raise the price of natural gas at all for individual consumers and to only raise the price by 3% for commercial use over 2,000 cubic meters a month. Of course this will result in some other price increases, but not a lot. Also the government agreed to be more respectful of the local people and to consult them before making decisions which would affect them. So, already by early afternoon, the barricades are down and the airport is open, buses are running, and taxis are taking passengers. I am most thankful that it all ended peacefully without the government bringing in the military.

As a consequence, the rest of our contingent should arrive there this afternoon; they are already at the airport. We’re all excited about leaving. The next time you’ll hear from me I’ll be aboard the ship heading south through the Straits of Magellan.

It’s great hearing from you as I know you probably will not be able to post while aboard the ship though it would be cool if you could! It’s also great to hear that in Chile, at least, there is a public that believes in direct action and a government that responds.

Bon voyage and keep in touch and I’ll take care of things back here… not to worry.