This Just In: New World’s Heaviest Pumpkin Coming to the Garden!

Posted in Around the Garden on October 17 2011, by Ann Rafalko 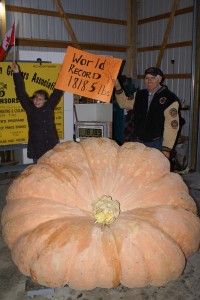 Just this weekend a new world’s biggest pumpkin was crowned in Canada. Weighing in at 1818.5 pounds and grown by Jim and Kelsey Bryson of Ormstown, Quebec, the new heaviest pumpkin in the world out-weighs last year’s world-record holder (which also called the Garden home for a time) by 8 pounds! Congratulations Jim and Kelsey! We can’t wait to meet you and your great pumpkin.

See the streak, and all the world record pumpkins since 1900 at http://www.giantpumpkin.com/world_records.php

Hey Don, I heard the background sound track to this picture. I’m sure our friends to the North, will know who “Dave who” is next year, if not Ron Wallace and “PAP” You know the USA always let other countries win once and awhile, just to be good sports! Just a note. This pumpkin has “Dave Who” and “Ronnie Known” genetics in it. As in Mom and Dad of the seed that grew it. Just another USA care package to our Northern friends! I’m sure the World Record will be back to old USA next year! Ohhh, that should get those boys fired up!! Hockey anyone?