A Giant in the Rainforest: The Kapok Tree

Posted in Around the Garden, Exhibitions on February 6 2012, by Joyce Newman 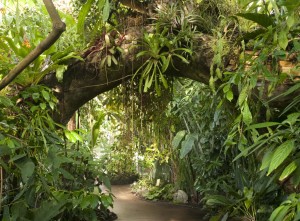 One of the most dramatic specimens in the NYBG‘s Enid A. Haupt Conservatory rainforest is the gigantic Kapok tree, now part of the Caribbean Garden exhibition. A man-made version–looking very real–arches over the lowland rainforest path, showing off numerous epiphytic plants–orchids and bromeliads–that cling to its sides. Visitors are usually amazed to learn the tree is man-made. Two other examples (one real, one man-made) in the rainforest gallery reach high atop the rainforest canopy.

The Kapok tree, Ceiba pentandra, can actually grow up to 200 feet tall, and its trunk alone can be nine or 10 feet across. But because the soil in the lowland rainforest is so thin and washes away with frequent rains, the tree must support itself by growing huge, tripod-like buttresses, rising outward from its base. In the wild, the tree is home to dozens of birds, frogs, and other plants, forming its own ecosystem.

During World War II, the long, silky fibers which disperse seeds were used in the Pacific theater to stuff life preservers and military bedding, among other uses. But in the rainforest, the trees are pioneers that are among the first to take hold in an open area. They can grow as much as 13 feet in a single year.

The ancient Maya believed that the Kapok tree was the link between heaven and earth–its branches were pathways for the soul to ascend to the spiritual world. Makes you think twice when passing by.

Can a Kapok tree be grown in the desert if lots of water is provided?