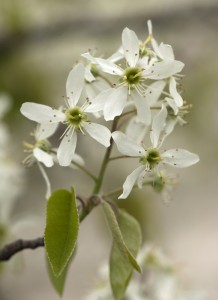 One of the most wonderful native trees in our area is the Shadbush (Amelanchier arborea), which is sometimes called the Serviceberry, Shadblow or Juneberry tree. It’s an all-season beauty, especially in a natural landscape setting, and just one of the many native plants you can learn about in the upcoming class, Gardening with Native Plants.

The small tree features lovely grey bark and showy flowers, as well as terrific berries for pies and gorgeous fall color. But equally beautiful are the stories and folktales that have been associated with this tree for hundreds of years.

One story is that the first settlers in the New England area often planned funeral services at the same time that the tree bloomed. Its blooming was a sign that the ground had thawed sufficiently to be able to dig graves. So the tree became known as the ‘serviceberry tree.’

Another story is that for thousands of years along the Hudson River Valley, the bloom time of the tree coincided with the massive spring shad fish run up the river to spawn. So the tree was called the ‘shadbush’ or ‘shadblow.’ Today, the shad fish population in the Hudson has declined to dangerously low levels, as have other Hudson River fish, and they are now at risk. But the trees have held their ground.

There’s an award-winning children’s book called When the Shadbush Blooms, in which a young Lenape Indian girl fishes for shad and recalls a time when her great, great grandmother did the same. In fact, many Native American tribes used the plant for food and medicine and to make arrow shafts.

The journals from Lewis and Clark’s expedition out west tell yet another tale. They are said to have survived on the berries when other food was scarce. Their journal entry of May 1804 lists the serviceberries as plentiful as the explorers passed near St. Louis, Missouri.

The dark blue-black berries that ripen in June make a delicious fruit pie and you can find recipes on several websites. In his Manual of Woody Landscape Plants, Michael Dirr writes that the Shadbush’s ripe fruit tastes “better than highbush blueberries.” And he notes, “I have had serviceberry pie and it ranks in the first order of desserts.”

The Shadbush is just one example of a diverse group of native woodland plants, each with its own set of stories. A fine specimen grows along the main path just past the Azalea Garden.

You can discover many more native plants in the upcoming class taught by Brad Roeller, who has worked for many years as a landscape manager in the Hudson Valley.

I love the stories about, and various names of, this species. Fine specimen on a nearby street; once I walked by while the householder was out and I asked if she knew the fruits were edible. She said she did but that they left them for the birds, although I was welcome to a few.

Matthew — Isn’t that nice of her! I’m not sure I could be that thoughtful ;-)

I love mine but every year it gets cedar/serviceberry rust something awful. I’ve tried spraying it with Immunox without success. Any advice??