From the Field: City Salamanders Shed Light on Global Declines

Posted in From the Field, Science on May 9 2012, by NYBG Science 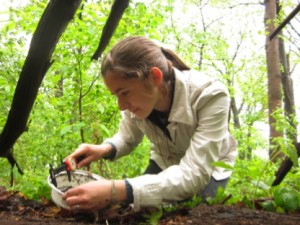 Deep in the Forest, Rebecca Policello–a student from Ossining High School–treks through the underbrush. She isn’t a wayward sightseer, but rather a curious student interested in something others normally overlook: Eastern Redback salamanders (Plethodon cinereus). Spending their entire lives on land and even thriving in urban environments such as The New York Botanical Garden, the subjects of Rebecca’s study could reveal new information about the decline that is sweeping over amphibian populations worldwide.

The amphibian decline has been primarily attributed to the disease Chytridiomycosis, which is caused by a pathogenic fungus, B. dendrobatidis. Teamed up with Dr. Jim Lewis of Fordham University and Ms. Jessica Arcate Schuler of The New York Botanical Garden, Rebecca set out to determine if changes in the immediate area due to urbanization are enough to impact the salamanders’ defenses. 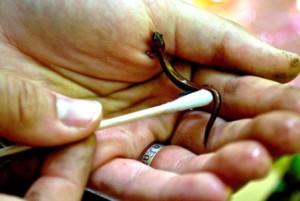 Salamanders from across the region were sampled for Rebecca’s research, using The New York Botanical Garden, Rockefeller State Park, Clarence Fahnestock State Park, and White Memorial Conservation Center as study sites. Once a salamander was found, the surrounding area was tested for soil conditions and canopy cover, while the salamanders were swabbed for their skin bacteria, and immediately released.

Back at Fordham University’s biological research facility, The Calder Center, the fungus and bacterial isolates from the salamanders’ skin were put into petri dishes for a head to head battle. After several weeks of fighting for resources, it could be determined if the bacteria would be able to protect an amphibian from the fungus.

Surprisingly, it appears that salamanders sampled in the urban study sites are better equipped to defend against the fungus. Rebecca recently received the Young Naturalists Award from the American Museum of Natural History for her research, and she looks forward to further pursuing environmental concerns.

We’re all just tougher in the evolutionary maelstrom of the city, humans, plants, pigeons, etc. and now… salamanders. This looks like such an incredibly cool project for a high school student.