Posted in From the Field, Science on September 27 2012, by Matt Newman 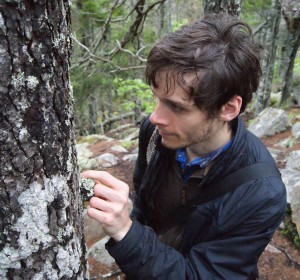 You’ll find them clinging to rock faces like flecks of gray paint, or carpeting a tree trunk with skeins of red whisps. Lichens come in myriad shapes, sizes, colors, and consistencies. But while they’re often overlooked during your average hike, they’re worth giving a spare glance the next time you’re outdoors–lichens play an important part in the ecosystem. Few know this so well as the NYBG‘s Dr. James Lendemer. Like many of the Garden’s globetrotting scientists–Michael Balick, Bill Buck, and Roy Halling, to name a few–Lendemer’s field odysseys carry him well beyond the laboratory door in his hunt for specimens. In recent years, that chalks up to long days spent trekking through the Great Smoky Mountains of the eastern United States.

For the uninitiated, lichens are cryptogams–fungi that reproduce by spores, as with other fungi and some groups of plants. But unlike either, lichens are unique in that they’re composite organisms, often a symbiotic combination of fungi and algae. Think of them as codependent roommates; the former acts as a sort of bodyguard for the latter in exchange for nourishing sugars from the algae’s photosynthesis. At large, lichens make the perfect bird nests by some avian standards, and the growths also have a penchant for breaking down dead trees and rocks while providing nitrogen for soil. Unassuming as they are, they’re integral to maintaining healthy biomes.

As a CUNY graduate student, Lendemer first found himself working under The New York Botanical Garden banner with a donor-provided fellowship in 2007. Since then, Lendemer has teamed with Drs. Richard Harris and Brendan Hodkinson to create a lichenological collaborative here at the Garden, using a National Science Foundation grant awarded earlier this year to inventory the lichens of the Mid-Atlantic Coastal Plain–an area the size of Alabama threatened by climate change and urbanization. Through the course of this collaboration, Lendemer’s team would be joined by Dr. Erin Tripp of the Rancho Santa Ana Botanic Garden, a botanist and long-time associate of James’. And together, they’ve since shattered the belief that the Smokies are spent for new discoveries in the world of lichens.

Lendemer and Tripp pegged Gorges State Park as the first major territory for their lichen inventory, a large tract in the mountains just beyond the Smokies. The decision wasn’t difficult; these mountains were once home territory for Tripp, who finished her undergraduate studies in nearby Asheville, NC. And there’s nowhere in eastern North America that receives heavier rainfall, making it a biodiversity hotspot for mosses. The wealth of lichens growing there aren’t much of a surprise, either, including several species completely new to science. It was a discovery that would set the tone for future excursions into the Great Smoky Mountains and the Appalachian range that encompasses them.

Since sampling that small plot of forest, the team has expanded its studies to cover a broader area, producing numbers even more impressive than first expected: a 60% increase compared to what was cataloged in the Smokies before, tallying more than 800 lichen species in the area. Not exactly small potatoes when you consider that most authorities felt the park had little more in the way of lichens to discover. 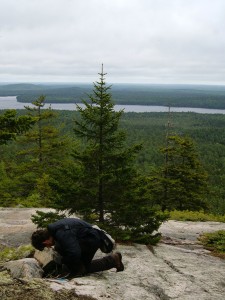 MAGNIFICENT! This is inspirational news.

How wonderful to learn that so many new lichen have been determined, recorded and studied. (I wish I could go on one of the outings to search out the remarkable growth!) I just purchased a very large lichen sample – a lovely specimen for both it’s natural design and botanical value.

Too many people glance past lichen without pausing to study its worth. I’ve looked at it on stones – on tree trunks – and even on gravemarkers. It is a fascinating growth and there is no telling (from these studies) what ‘it’ can tell ‘us.’

This work is commendable; I am so pleased to learn they received a grant to do this extensive work. I hope they have continued success. It is amazing to note mankind often thinks they have charted everything in the world — but obviously not quite…