Posted in Exhibitions on December 24 2012, by Matt Newman 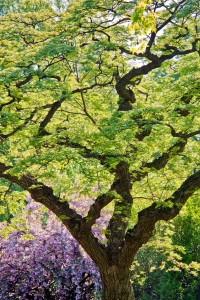 Larry Lederman’s eye for the aesthetic of branches, creased bark, and the leaf’s palette is well-trained, though photography wasn’t his first calling. What was initially a hobby came about late in his career as a Wall Street lawyer, at a time when escaping the office to the relative peace and simplicity of the NYBG‘s Forest seemed a panacea for New York City’s stresses. Here, he found through a lens what many artists chase for years–a muse that inspired through each of the four seasons, well beyond autumn’s changing leaves or the new growth of spring.

That inspiration has grown to encompass more than a hobby, with Lederman’s passion for the trees of the northeast now captured in a new book, Magnificent Trees of The New York Botanical Garden. Inside, you’ll find more than 200 individual photographs of trees growing in our 250-acre landscape, many of which have been captured repeatedly, in the varied lights of spring, summer, fall, and winter. Lederman’s finished effect is one of passing time, outlining the qualities and personalities of the trees as the project plays out.

Speaking with Mr. Lederman, we put together a clear idea of his motivation’s origins, as well as how this book–and the exhibition surrounding it–came together.