Posted in Gardens and Collections on January 15 2013, by Sonia Uyterhoeven 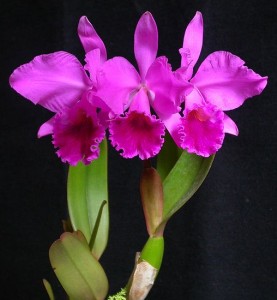 In December, I recounted the story of the renowned 19th century botanist Asa Gray’s quest for Oconee bells (Shortia galacifolia). The New Year brings new stories; this one takes us on a journey from the northeastern region of Brazil to English hothouses and Scottish botanic gardens. It is the tale of one of the early discoveries of the corsage orchid: Cattleya labiata.

In 1816, a naturalist named William Swainson traveled into the jungles of northern Brazil in search of exotic ferns, mosses, and tropical plants to send back to collectors and botanical gardens in the United Kingdom. One of his shipments reached a man named William Cattley. A collector and avid horticulturist, Cattley lived on the outskirts of London in Barnet, England, where he grew topical plants–including orchids–in his hothouse.

Many stories from the past are surrounded by a certain mythology, and this one is no exception. The romantic version of this tale is that Cattley received a specimen of the orchid used as packing material to protect a shipment of ferns. The keen horticulturist was wise to see that he had something special in hand, and rescued the orchid from the packing material.

The more accurate version of the story is that Swainson had seen Cattleya labiata in flower in the wild, and knew that Cattley had an interest in orchids. Plants were often packed together to help protect them on their long journey across the Atlantic and the orchid was deliberately sent as part of a mixed shipment of tropical plants. This by no means diminished Cattley’s accomplishment. Naturalists did not have the luxury of UPS and FedEx to expedite their deliveries, and the combination of long sea voyages and a lack of familiarity with new tropical introductions made growing these specimens a challenge.

Cattley’s orchid flowered in November of 1818. The following year, the same orchid from another one of Swainson’s shipments flowered at the Glasgow Botanic Garden. The English botanist John Lindley described the orchid in one of his books in 1821; he gave it the name of Cattleya labiata in honor of Cattley–the first person to successfully grow the orchid in the U.K.

Cattleya labiata immediately caused a stir amongst collectors and orchid enthusiasts. It is an exotic looking orchid with fragrant flowers that range in color from rosy pink or lavender to deep purple. The tipping point for this orchid is the magnificent size of the blooms–flower size ranges from five to seven inches. Two to five blooms are produced on each spike and flowering lasts up to six weeks.

The description of the orchid is captured by its name; the botanical epithet that Lindley gave to the orchid–labiata–comes from the Latin labium, meaning lip. The bottom petal on an orchid is called the labellum, or the the lip, a modified petal that is usually enlarged or has an unusual shape. These enlarged petals attract and are often used as landing pads by pollinators. When Lindley saw Cattleya labiata’s large, showy labellum, he essentially named it the “orchid with the big lip.”

These colorful, fragrant, large-flowering orchids attracted the attention of collectors all over Europe, and many naturalists set out to collect them for wealthy patrons at home. At this point, the story takes an interesting turn–one that is reminiscent of the tale I told in December.

Swainson, the naturalist who had collected the cattleya, went off to New Zealand and disappeared into the wilds on another expedition. Other collectors tried to retrace his steps, but mistakenly focused their search on the area around Rio de Janeiro (the location where he had shipped the plants) and not in the northeast province of Pernambuco, where Swainson had found the orchid. 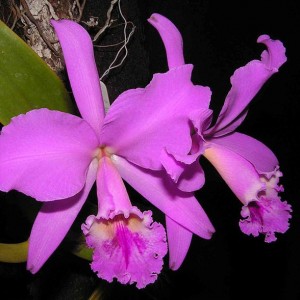 To make matters worse, another collector thought that he had found Cattleya labiata in the wild near Rio de Janeiro, whereas he had actually collected Laelia lobata. For those of you who are acquainted with orchids, you can appreciate how such a mistake was easily made–botanists couldn’t decide if they were separate genera for quite some time.

Decades passed, and it was seventy years before a collector, quite accidentally, re-discovered Cattleya labiata. In 1889, a French entomologist sent his collector to Brazil and the naturalist shipped back some orchids along with the insects. An orchid grower happened to stop by the Frenchman’s home while the orchid was in bloom only to realize it was the long lost Cattleya labiata. There is never a dull moment in the lives of botanists, naturalists, horticulturists and the like, and as we are learning, patience and persistence are the key to success in any botanical endeavor. Next week, we will take a more practical tack and look at some of the best ways to grow cattleyas in your own home.

Well written. Well done. We grow these here in Texas and love them.