Into the Lowland Rain Forest

Posted in Gardens and Collections on March 14 2019, by Lloyd Jones

Lloyd Jones is an Assistant Gardener in NYBG’s Enid A. Haupt Conservatory.

In the heart of the Bronx remains hidden an unlikely treasure, an oasis of lush vegetation untouched by the city. The Enid A. Haupt Conservatory houses one of the world’s most diverse living collections of plants. As one of the gardeners who cares for this green paradise, I’d like to invite you to stroll through the Lowland Rain Forest, home to many plants with extraordinary characteristics.

One of the world’s rarest plants is Osa pulchra. Sadly, only 30 known specimens exist in the wild in Costa Rica and Panama. However, it is cultivated in several botanical gardens, including NYBG. The Garden’s specimens have been growing here since 2006 when we received them in an exchange with The Huntington Botanical Garden in San Marino, California. The delicate trumpet-shaped flowers, similar to those of Brugmansia, are quite a sight to enjoy, and I’ll share with you an insider tip: the best time to experience the flowers is when the sun passes overhead and you can see the flowers from underneath. You will find Osa pulchra blooming in the lowland rain forest, midway down the path on the courtyard side of the building.

What’s Beautiful Now: Blossoms Above & Below

Posted in Around the Garden, Gardens and Collections, Photography, What's Beautiful Now on April 29 2016, by Lansing Moore

Happy Arbor Day! There is no better time to show love for trees than during flowering tree season. Right now the crabapples have picked up where the cherry blossoms left off with their own colorful display—and that’s only the beginning of what’s beautiful now at NYBG!

The 25th Anniversary Antique Garden Furniture Fair opened last night with its festive Preview Party, and this weekend’s visitors can admire fine antiques and treasures for the garden and the garden room from 30 leading exhibitors in the Conservatory Tent. On grounds, spring’s progress continues across NYBG’s historic landscape. The Azalea Garden is at 75% of peak color, and the newly-reopened Lilac Collection is debuting its fragrant blossoms for the enjoyment of visitors. View highlights from across the Garden in the gallery below, and plan your visit today!

A Garden and a Landmark, Thanks to Your Support

Posted in Gardens and Collections on September 22 2014, by Lansing Moore 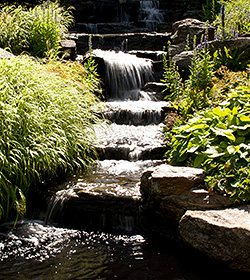 Two years ago, we began a process that would ultimately lead to the restoration of our historic Rock Garden cascade. Originally a project of the horticulturist T. H. Everett and the Depression-era Works Progress Administration, the waterfall at the center of this 2.5-acre refuge had fallen into disrepair when it was selected as a candidate for 2012’s Partners in Preservation competition. This campaign offered grants of $250,000 to whichever sites were most chosen by online voters.

Thanks to New Yorkers and fans of the Garden like you, we won! The Rock Garden was one of sixteen sites to receive a Partners in Preservation grant in 2012. This past April, we reopened the Rock Garden to visitors, with the cascade bubbling in full health for the first time in years. With the recent approval of our final report, our grant is now complete and we want to extend the most heartfelt thanks to Partners in Preservation, a joint venture of American Express and the National Trust for Historic Preservation, and of course to everyone who answered the call to vote.

The Return of the Rock Garden

Posted in Gardens and Collections on March 31 2014, by Lansing Moore 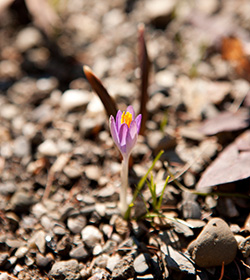 On April 1, the Rock Garden reopens for the season after an extensive, winter-long restoration of its historic features! Visitors will be able to admire water running down the cascade and into the pond for the first time in years. After remaining dry for so long, the stream is now active again, as well as more water efficient.

The soft bubbling of the stream accompanied by the wind rustling the branches has defined the tranquility of the Rock Garden since its establishment in the 1930s. Originally a project of the Depression-era Works Progress Administration, the Rock Garden was showing its age and was in great need of restoration. Head through for a sneak peak at the final product before tomorrow’s debut!

Posted in Around the Garden, Gardens and Collections, Photography on February 18 2014, by Lansing Moore 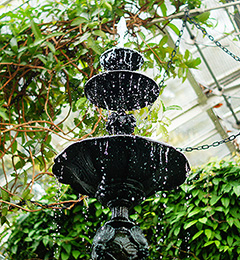 It is time once again to announce another round of winners in our Tropical Paradise Photo Contest. We certainly hope you all enjoyed the long Presidents’ Day weekend in spite of the soggy weather. Appropriately enough, some of our best photographic entries this week captured the beauty of water. Of course, there is a world of difference between the warm mists of the Enid A. Haupt Conservatory, and the ice covering the grounds.

If you’re looking to try your hand at photographing our permanent Conservatory collections, we’re now into week five of a total six judging windows to submit your work, so don’t wait long! Simply upload your photos of the Tropical Paradise exhibition currently in the Conservatory to our Flickr group (don’t forget the #tropicalparadise hashtag) before 6 p.m. on Friday, February 21, to be entered into this week’s judging. Until then, please enjoy the three winning photos in the Macro and Sense-of-Place categories, and stay dry out there!

Posted in Gardens and Collections on November 6 2013, by Matt Newman 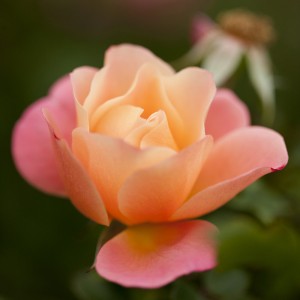 With the leaves on the trees peaking in a flurry of color, and the mums in the Home Gardening Center boasting their heartiest hues against dipping temperatures, autumn earns its reputation as a time for brief and fervent garden fireworks. But where most of the flowers and foliage drawing our attention are known as hardy hold-outs against the coming frost, it seldom pays to overlook the delicate beauty now closing out its season in the Peggy Rockefeller Rose Garden.

The rose varieties in our collection, many of them bred for coddle-free survival in spite of the rose’s needy reputation, have put on a gripping show this year. So, to celebrate that longevity, I’ve put together a little gallery of the latest stars among the shrubs, some of the blooms bringing up the rear before the cold season sets in to close up shop until spring. It being hump day, I figured it couldn’t hurt to liven up your autumn afternoon with some reds and yellows in a different medium.

Posted in Gardens and Collections on September 24 2013, by Sonia Uyterhoeven

Autumn is often an under-appreciated season in the garden. Natural light casts deep shadows and illuminates the garden with silvery hues. Fall foliage adds fire to the drama. While many flowers are fading, statuesque tropical salvias are coming into their own.

In the Perennial Garden, the main entrance is lined with some magnificent salvias. The prominent star of the promenade is the Mexican sage, Salvia ‘Phyllis’ Fancy’, which differs from the straight species in that she flowers earlier and for longer. Her foliage is greener as opposed to the wooly silver tinge of the species.

What she has in common with her predecessors is her beauty. The flowers are the classic velvety purple and white flowers of the Mexican sage. They remind me of pipe cleaners in their texture and appearance. Her most outstanding feature is that she is a hummingbird magnet. Whenever I frequent the location—morning is the best time—I see hummingbirds flitting around the blossoms with their iridescent bodies traveling at the speed of light.

The same location is home to the velvet sage (Salvia confertiflora) whose fuzzy red inflorescences are as soft as the name advertises. She is accompanied by Salvia ‘Blue Chiquita’—a compact salvia with quilted leaves and a white underside. The azure flowers are out from late summer until frost.

Posted in Gardening Tips, Gardens and Collections on August 13 2013, by Sonia Uyterhoeven

Last week we discussed how to plant your water lilies. This week we will focus on the bloom. Water lilies flower for 3 – 5 days, with the bloom emerging from the murky depths on the first day, opening, and standing erect. On the second day, the flower starts to bend slightly, slouching more on the third day and falling back into the water by the fifth.

Once the bloom disappears back into the water, it is a good idea to take your hand and run it down the stem until you get close to the base, then either snap or cut it off. The water lily stem will start to get mushy as it ages, and sometimes a good tug is all you need.

In a pond situation, the flower head forms seeds that eventually find their home on the muddy floor of the pond. As a homeowner, however, you are probably interested in maximizing your bloom. Seed production takes energy away from flowering, so try to remove old flowers and foliage once a week to keep your water lily tidy and focused on producing flowers.

Posted in Gardens and Collections on August 5 2013, by Matt Newman 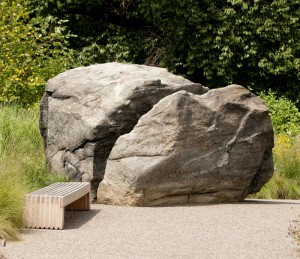 Because it’s an absurdly beautiful day, but also a Monday (we’re not open to the public most Mondays—our horticulturists need space and safety to work on weekly sprucing-up), I figured I’d throw together a little teaser for anyone planning to pay us a visit this week. The Native Plant Garden in particular is dancing in the middle distance between wild and dapper, and the effect is one of natural improvisation.

Our NPG horticulturists like to say that the space bleeds from one biome into the next—that plants and colors are painted in swathes and mingle at the edges, dry forest melting into wet forest, meadow phasing into wetland. There’s so much to see growing in the Native Plant Garden in midsummer, and all of it wrapped up together in a subtly but carefully curated space. It’s utopian in the best way.

The Native Plant Garden is an absolute must-see all year round, but whether or not this picturesque weather keeps up through the rest of the week, it’s still your one-stop shop for peace of mind. That’s what the benches are for, after all.

Posted in Around the Garden, Gardens and Collections, What's Beautiful Now on July 11 2013, by Joyce Newman

Joyce H. Newman holds a Certificate in Horticulture from The New York Botanical Garden and has been a Tour Guide for over seven years. She is the former editor of Consumer Reports GreenerChoices.org. 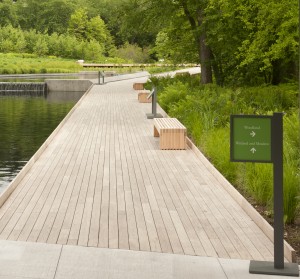 Native Americans in Virginia made bows from black locust and are believed to have planted the trees moving eastward from the Southern Appalachians. Colonists at Jamestown reportedly used the trees to build corner posts for their first homes. The wood was also used by pioneers for fence posts, ship masts, and for pegs—called trunnels—in ship building.

When wet, the wood expands and becomes leak proof. So the ship trunnels were so strong that they lasted even longer than the ship hulls. According to naturalist Donald Peattie, after the War of 1812, the British claimed that they were defeated on Lake Champlain because of the superiority of the Americans’ “locust fleet” built with the trunnels.

Black locust trees grow rapidly by sending out underground stems that send up new shoots to form new trees. For this reason some considered them to be invasive or at best a nuisance. Because the tree spreads naturally, it is usually found in groves and these can be managed sustainably. For outdoor projects in the New York metro area, some progressive landscape architects seem to be using it more frequently as an alternative to tropical hardwoods.