Scott A. Mori, Ph.D., Nathaniel Lord Britton Curator of Botany has been studying New World rain forests for The New York Botanical Garden for nearly 35 years. He has witnessed an unrelenting reduction in the extent of the forests he studies and, as a result, is dedicated to preserving the diversity of plants and animals found there.

Several posts ago, I introduced the cannon ball tree and nominated it as the most interesting tree on earth. I then challenged others to nominate additional plants for this honor, receiving suggestions such as the wiliwili tree, a species of legume in the genus Erythrina; and the sapodilla, a species so important and interesting that it is the common name for the Sapotaceae or chicle family. In fact, there are so many fascinating trees to examine that I have decided to tackle yet another unique specimen studied during my career.

In this blog, I introduce the sapucaia tree, a plant that is easily recognized–if you happen to be in the Amazon–by the wailing sound the wind makes as it blows across the open fruits, a phenomenon referred to in the common name of the species. Look up and you will see one of the largest fruits found in the plant kingdom—and once you have witnessed it, you will never forget what it is! I have included a slide show with this blog to make it easier to follow the rest of this post.

Just before flowering, the deciduous leaves of this species fall, with the tree remaining leafless for 10 to 15 days. Soon after, new, reddish-colored leaves flush and blooming occurs. If you look carefully into the crown of the tree, you will observe female carpenter bees removing sterile pollen that they feed to their larvae upon return to their nests. The bees land on a platform called the androecial hood and collect sterile or fodder pollen from it–this is the reward that lures them to the flower. As they collect fodder pollen, fertile pollen is placed on their heads and later rubbed onto the stigmas of subsequent flowers visited. But, in order for the fruits to develop, the pollen has to be carried from one tree to another because the sapucaia is self-incompatible.

Once an ovule is fertilized, an embryo develops and seeds are formed. On the very night that the fruit opens, it is visited by the greater spear-nosed bat (Phyllostomus hastatus). The bats visit the open fruits in search of the edible fleshy aril surrounding the funicle. When they arrive at their night roosts, they eat the aril or accidentally drop it while in flight away from the sapucaia trees. Other frugivorous bats may also be involved in the seed dispersal of L. pisonis, but this has not been demonstrated. 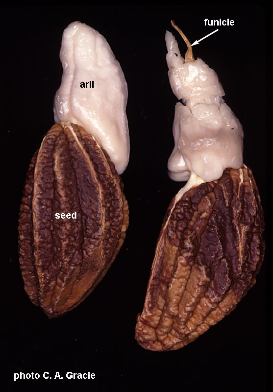 We know so little about the pollination and dispersal of tropical plants that even simple observations contribute to our knowledge of their reproductive biology.

I am grateful to Michael Rothman for preparing the paintings under my direction and allowing me to use them in this post, Carol Gracie for giving permission for using her beautiful images, and the National Science Foundation for allowing me to synthesize my career-long research in the Opportunities for Promoting Understanding Through Synthesis grant program.