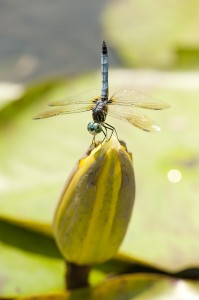 The wetland area of the new Native Plant Garden is home to many kinds of animals, but none more magnificent than the dragonflies that hover and buzz over the water, performing amazing airborne feats in search of food. Almost as soon as the water feature was filled during construction, the dragonflies moved in.

The latest scientific evidence suggests that their aerial performances are not just lovely to look at—they’re highly choreographed to target prey. In fact, a recent New York Times report notes that dragonflies are much better hunters than African lions or sharks. Dragonflies “manage to snatch their targets in midair more than 95% of the time,” often eating “on the spur without bothering to alight.” By comparison, the success rate for lions is just 25%, and for sharks just 35%.

Dragonflies are not new residents to the Garden, either. We have long had a healthy population of these amazing insects, and we’re quite happy to have them here, too. Dragonflies may be an indicator of a healthy ecosystem. While adult dragonflies are terrestrial insects, immature dragonflies, also known as nymphs, are aquatic and can be sensitive to pollutants in the water.

Another reason we like having dragonflies around? Guess what they eat … mosquitoes!

Dragonfly nymphs prey on mosquito larvae and adult dragonflies eat adult mosquitoes. While there is no consensus on how effective they are (and there is danger in bringing in non-native species), each dead mosquito is a positive in our book. How do adult dragonflies catch mosquitoes? They do it by diving, flying backwards or upside down, moving their four net-like wings independently, and focusing their large, sharp eyes with 360-degree vision. They are able to see their prey when they fly toward it and still see it when they fly away from it. A little scary.

There are several watery places where the Garden’s dragonflies may be breeding, including the Conservatory Courtyard Pools, the pools in the Rock Garden, along the Bronx River, and in several of the ephemeral streams that cross through the Forest on their way to the river. And now, the beautiful pools of the Native Plant Garden, too. As you walk along over the north bridge beside the wetland into the meadow, you might see a frog try to catch a dragonfly… and fail. Here’s a high-speed video sequence that captures some airborne acrobatics.