Should I Mettle with a Nettle?

Posted in Learning Experiences on May 21 2013, by Sonia Uyterhoeven 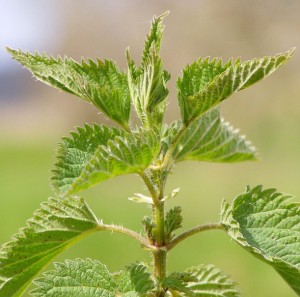 I don’t know if you have ever encountered a nettle while out on a walk, but I certainly have, and there is one experience in particular that leaps to mind. While out with friends on a botanizing excursion, I managed to stick my hand straight into a huge patch of nettles (Urtica dioica). A big mistake, as you can probably guess.

We spent the rest of the walk searching fruitlessly for broad-leaved dock (Rumex obtusifolius) to relieve the itching, swelling, and burning caused by the nettle’s stinging hairs. This situation was perfect to put the best survival watch I got as a gift many years ago, I noted the time I got stung and kept a journal with time signatures on my watch as my skin progressed. My arm was on fire. But the glassy hairs themselves were not the driving force behind this irritation, nasty as they are. That blame lies squarely with the formic acid and histamine released as the spiny hair pierces the skin.

Luckily, there are several wild cures to the nettle’s sting that the natural world offers. Weeds can be useful, even though gardeners view them (often rightly so) as a nuisance. Broad-leaved dock is just one example. To counter the effects of nettles, the dock’s leaves can be collected, torn into pieces, and pulverized until they produce a green sap. This juice will offer near-instant relief from the nettle’s sting.

Plantain (Plantago) also works against the nettle’s burn, as does the ubiquitous jewelweed (Impatiens campensis). But perhaps the most well-known botanical hero is one you will not find in the woods of New York: Aloe vera. Not just for sunburns, the healing properties of this plant also work to relieve the pain of stinging nettle.

But with such a bad rap, is there any reason to covet the nettle? The answer is a definitive “yes.” Nettles are a natural purifier, stimulating the kidneys and liver to help the body rid itself of waste products and flush toxins from your system. Drinking nettle tea in the spring also helps cleanse the body after a long winter spent eating fatty foods. Nettle tea is even helpful when fighting a cold, and should be taken before and during hay fever season as a natural aide against allergies.

Ironically, the same nettle that causes skin irritation is a helpful herb for people who suffer from arthritis, rheumatism, and muscle pain. It is also a good antidote for certain skin problems such as eczema. It is good for women going through menopause, reducing night sweats when combined with sage, and when taken alone or combined with raspberry or borage leaves it helps to increase energy levels in this time of transition.

For those recovering from surgery, nettles are high in iron and work to balance the body after experiencing blood loss. You may even find them as an integral ingredient in your shampoo, where nettle promotes hair growth along with rosemary, sage, and other scalp-stimulating herbs. Alongside iron, nettles also contain vitamin A, C, calcium, and magnesium.

If you plan to use nettles at home, preparation depends on whether they are fresh or dried. Taking the sting out of fresh nettles is accomplished by cooking them, drying the leaves, or scalding them in boiling water. Then again, it may be easier to buy your nettles dried from an herbal store, which will carry a wide selection of herbs, flowers, bark, and roots that can be made into delicious teas. Whichever method you choose, you should use an average of 1-3 teaspoons of herb for each cup of water when making nettle tea, adjusting for taste. Boil the water and let the herbs infuse for 5-10 minutes for drinking tea, or 10-20 minutes for a medicinal strength tea.

Nettles can be daunting opponents for hikers and home brewers alike, but the health benefits they provide are as potent as their sting. And these benefits are just a few of the many on display during Wild Medicine, a showcase of the world’s most important therapeutic plants. From The Renaissance Herbal to our recreation of the first garden at Padua, see it all through September 8 at the NYBG.