The leaves of Virginia bluebell sprout each spring in such deep shades of purple that they are difficult to see against the dark soil. As the leaves mature, the purple coloration is gradually lost until they become a soft green. Flowers, too, undergo a color change, from pink in bud to a lovely shade of blue shortly before the buds open.

The floral color change is not uncommon in members of this family, the Boraginaceae (borage family). Its members include forget-me-not (Myosotis spp.), viper’s bugloss (Echium vulgare), and lungwort (Pulmonaria spp.), all of which have pink buds opening as blue flowers. The color change is due to changes in the pH of the cell sap, and, like some hydrangeas, plants growing in more acidic soils will have flowers of a deeper shade of blue. Members of the borage family also share in common the shape of their inflorescence, referred to as a scorpioid cyme for the way it uncoils like a scorpion’s tail. A true spring ephemeral, the leaves of Virginia bluebells turn yellow soon after the flowers have finished blooming and are gone by late June. 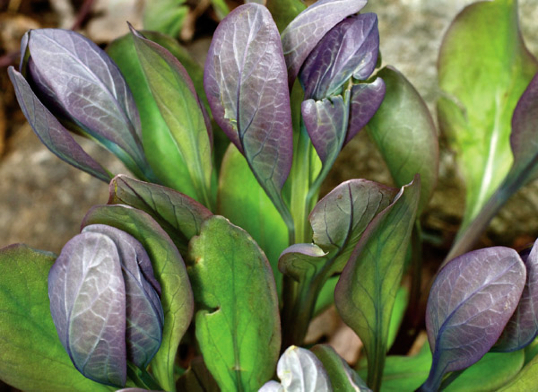 ◄ Back
Next ►
Picture 1 of 2
The leaves of Virginia bluebells emerge each spring in a deep purple color that quickly fades to green.

Virginia bluebells was first collected in Virginia by Peter Kalm, a student of Linnaeus, and initially described by Linnaeus as a species of Pulmonaria, a related European genus. More than 40 years later, a German botanist, Albrecht Roth, realized that this species was different enough to warrant being placed in a new genus; he named it Mertensia in honor of another German botanist, F. C. Mertens. The generic name Mertensia was later also given to a group of jellyfish to commemorate the research on that group done by Mertens’ son, K. H. Mertens. Thus, as with Prunella (self-heal, in the mint family) and the dunnock (a bird in the accentor group), we have both a plant and an animal genus bearing the same name.

We have few truly blue flowers, and Virginia bluebells are especially favored by native plant gardeners because of the contrast they provide with the many yellow-, pink-, and white-flowered wildflowers that bloom at this time of year. They are easy to grow in shaded moist soils and produce flowers over a period of a few weeks. Once again, it is our native queen bumblebee that serves as the principal pollinator of Virginia bluebells. Because the nectar is at the base of the long, bell-like flowers, bees that do not have a proboscis (tongue) long enough to reach it may take a shortcut and slit the corolla closer to the nectar source to pilfer the nectar. Such a method does not usually result in pollination.

You can learn more about Virginia bluebells and other wildflowers in my book, Spring Wildflowers of the Northeast: A Natural History, available in Shop in The Garden.