I have included a picture of blueberry for a different reason, namely because it is one of the few plants from North America that was domesticated for human consumption. Therefore you can think of it as patriotic to recognize this economically important species on Independence Day. The fact that its fruits are blue, one of the colors of our flag, also helps. 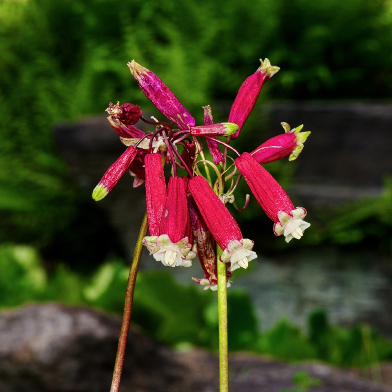 See what other natural fireworks you can find in the garden. And for a night show, check out the fireflies that are now at their peak in New York’s local parks and woods. Different species, of which there are several locally, give off different patterns of bioluminescence in their mating ritual.

All right, the other fireworks are fun to watch, too, for the brief moment they are visible on July the Fourth.

that is so interesting about the spores being used to make flash powder….the onion and toothpick weed have shapes that are so similar it’s uncanny…Happy 4th!

This puts me in mind of the botanical lyrics from “South Pacific.”

“I’m as corny as Kansas in August,
I’m as normal as blueberry pie.”