Trout Lilies: What’s in a Name?

Posted in Around the Garden on May 7 2014, by Joyce Newman

The spring trout lily (Erythronium americanum) is one of several native perennial wildflowers blooming now in the Native Plant Garden. Its flowers appear in sunny patches in the forest woodland area. At the base of each plant are its telltale leaves—speckled, elongated, and looking like brown brook trout.

The flowers come up quickly in the early spring, then produce fruit and create new leaves, all before the tall, deciduous trees leaf out and block much of the sunlight. In the heat of summer, the flowers and foliage disappear, which is why they are called ephemerals.

Some other examples of native ephemerals are blood root (Sanguinaria canadensis), liver’s leaf or hepatica (Hepatica nobilis), and Dutchman’s breeches (Dicentra cucullaria). But the trout lily is by far my favorite for there are so many stories about it.

It’s sometimes called the dog’s-tooth violet because its corm, the tiny bulb at the base of the root, resembles a tiny, white dog’s tooth. According to some experts, the small bulb is actually edible if you take off its fibrous covering. Some say it tastes like cucumber. However, various websites caution that you should not eat a lot of these bulbs at once, as the bulb can cause vomiting. The species is also protected in some areas, meaning it is best enjoyed for its beauty and otherwise left untouched. 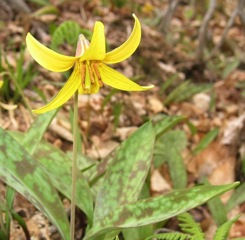 The plant’s root was also once considered to be an aphrodisiac. Expert Anna Pavord, author of Bulb, explains that in the 17th century Europeans were so excited to obtain specimens of the trout lily from America because of its sexy reputation, and she quotes the famous English herbalist and gardener John Parkinson, author of Paradisus (1629), who wrote: “Wee have had from Virginia a roote sent unto us, which the naturall people holde not onely to be singular to procure lust, but hold it as a secret, loth to reveale it.”

The trout lily grows in large groupings in many regions all across the U.S. Its short, nodding blooms look like miniature lilies, rising up about 8-10 inches from the base of the leaves. There are white and pink varieties as well as the more common yellow ones. Its petals and sepals curve backwards showing six brown stamens that stick out like reptilian tongues.

These stamens give rise to yet another common name for the trout lily, “adder’s-tongue,” about which the famous American poet Emily Dickinson wrote in her letters: “…. in our rambles we found many beautiful children of spring, which I will mention and see if you have found them…. adder’s- tongue, … liver-leaf, blood-root, and many other smaller flowers.” Dickinson wrote many poems about spring ephemerals, which she also collected for her herbarium.

Like some other ephemeral wildflowers, the trout lily has a fascinating symbiotic relationship with ants—a partnership known as myrmecochory. This term means that the plant’s ripe seeds are dispersed and actually planted underground by ants. The ants are attracted to a tasty coating on the seeds and so they take the seeds away for eating and spread them in the process.

To cultivate your own trout lilies, you need a partly shady woodland area with soil on the acidic side—ideally a location that’s damp in spring, but doesn’t totally dry out in summer either. The plantings do well under trees and shrubs. In her book on bulbs, Pavord recommends that you plant in the fall with the pointed end of the bulb facing upward, about 4 inches deep and 4 inches apart. You can pair them with hostas, ferns, or other shade-loving plants. Or just visit the Native Plant Garden soon and enjoy.