In Search of Fumewort at Garth Woods, We Found Something Better

On a steamy day in late May, a crew of invasive species scouts assembled in the parking lot of the Garth Woods Apartments in Scarsdale, Westchester County. Our mission? To survey Garth Woods, a sliver of intact riparian forest, for Corydalis incisa, also called incised fumewort or purple keman. Much to our excitement, this case of sleuthing had a happy ending: for now, Garth Woods shows no sign of C. incisa, and full to the brim with uncommon native herbs that were a joy to see.

C. incisa, which is native to Asia, is an emerging invasive along the Bronx River; it was first recorded in the New York metropolitan region during the Bronx Park BioBlitz in 2005, and has subsequently been observed along the riverbanks of the Bronx River in The New York Botanical Garden and in several sites in Westchester County.

Where possible, proactively addressing the spread of aggressive invasive plants—including incised fumewort—is an important facet of natural resource management. As newcomers to the ecosystems in which they are introduced, invasive species frequently lack predators and can outcompete native species, threatening the intricate functioning of ecosystems. Now, through a partnership between the Bronx River Alliance and affiliates, the Lower Hudson Partnership for Regional Invasive Species Management, New York City Parks, and The New York Botanical Garden, community members and botanists are working together to systematically survey sites along the Bronx River for C. incisa populations.

Garth Woods, a charming, 60-acre remnant of old-growth forest wedged between the north- and southbound Bronx River Parkway from Harney Road to Crane Road, is one such survey site. We joined Jessica Schuler, Director of the Thain Family Forest; and Bob DelTorto and Suzanne Nolan, volunteers from the Bronx River Parkway Reservation Conservancy in laying a 100-meter transect, along which we began actively looking for C. incisa. This species’ diminutive size, delicate and highly divided leaves, and dusky purple flowers belie its violent spreading mechanism: an explosively dehiscent green fruit that can send seeds up to nine feet from the parent plant.

But as we scanned the shady forest floor, dappled with the special light of mid-afternoon in late spring, we discovered delight after delight, without the scar of a single C. incisa plant. Among our finds were golden Alexander, Zizia aurea, a flowering perennial herb, just turning the color of its common name; blue cohosh, Caulophyllum thalictroides, without its blue fruits, but making itself known by its characteristic “tulip-shaped” leaves; and wild ginger growing in secretive patches, concealing their ethereal maroon flowers. When Jessica stumbled across a Veratrum viride, or false hellebore, her enthusiasm was audible: this highly toxic plant is one of her favorite herbs! Other especially nice finds included cutleaf toothwort, Cardamine concatenata; bloodroot, Sanguinaria canadensis; and wake robin, Trillium erectum. You can find a full list of the 66 species we encountered at Garth Woods, prepared by Zihao Wang, at the bottom of this post. 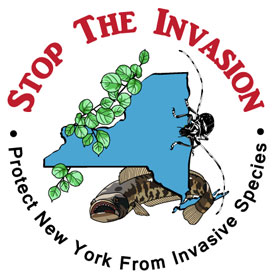 Why has Garth Woods, an unassuming fragment of forest situated between strips of a very busy highway, retained so much of its understory biodiversity in comparison to other local forests? We can’t say for sure, but one contributing factor may be the absence of deer in this isolated spot. The presence of the highway on either side of the Woods acts as a barrier, preventing high concentrations of deer from stripping the herbaceous and shrub layers of their native species, which would open them up to colonization by invasives. Many other variables are likely acting simultaneously to produce this lovely example of native Northeastern biodiversity.