Find Them and Other Fledglings on Final Bird Walk of Season 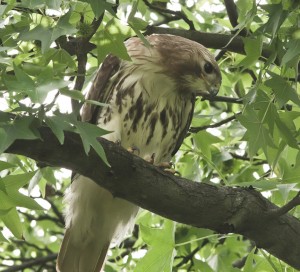 Summer—and all its activity—is just beginning for us, but this is the time when birds wind down. They began their busy season in February, in preparation for migration and nesting. They got ready for their long flight by eating more, a process called hyperphagia, so that they could go longer distances without stopping.

Now things have slowed for them. During the summer, though some species might have a second brood, for the most part the adults of many species, having reared their young, will be resting up for the fall migration back to their wintering grounds. 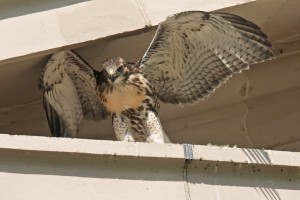 One adult pair here at the Garden—our nesting red-tailed hawks—have been kept active, however, with the successful fledging of their three babies. The siblings all took their first flight last week and can be seen hanging around the nest area—on the roof of the Library building, on nearby trees, and even on a bench, waiting for Mom and Dad to bring them food. But soon they will learn to hunt on their own. 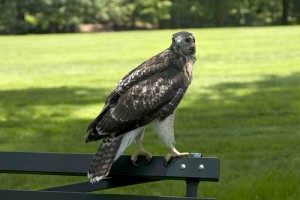 Come and look for the red-tailed hawk fledglings and other young birds on the final bird walk of the season. The walks will go on hiatus during July and August and return again September 5 in time for migration.

Chris Lyons, who has been following the red-tailed hawk nest, had this to say, confirming that the adults are the same that nested at Fordham University in the past.

Yes, the female has to be Rose–she’s banded. I could never get a long enough look at the NYBG male to confirm he was Hawkeye (I simply can’t spend enough time over there), but Rich’s photo was good enough for me to feel sure.

The only way it could be a different pair, nesting right by the Fordham campus, would be if one or both Fordham adults had died. They just decided to shift the nest-site, which is a normal thing for breeding Red-Tails to do, every few years. In their minds, Fordham and the NYBG are just part of the same territory, which they will defend against all comers. They’ll probably change nest-sites again, eventually. They could go on nesting in this general location for another ten years, or more. But every year has new challenges. Most likely one will pre-decease the other, and then another adult will come in to fill the gap–and so on.

This comment from Richard Fleisher, who has been following and photographing the red-tails for the past several weeks.

I was at the Garden on Tuesday and the Hawks put on quite a show. At about 4:00, just as Barry and Rita showed up, the three youngsters also arrived. They flew from tree to tree, crying for food. Then we saw Rose swoop down out of one of the trees, catch some prey on the ground right in front of us and fly off.

A few moments later it was Hawkeye’s turn. He also caught either a mouse or a rat and flew off landing in the trees on the other side of the grassy field (facing the library to our right). First one and then a second of the youngsters flew after him. He had dropped off whatever he had caught for them to eat.

Tripod in hand, long lens attached I went after them. What followed was amazing as the larger of the two fledglings proceeded to eat the entire meal. The smaller of the two stood there watching its larger sibling stuff itself while it did not get much more than a few morsels that were left. I was no more than twenty yards from this entire spectacle, shooting like mad.

Barry and Rita Freed, who have also been regularly following the red-tails here at the Garden, give details of their observation of the feeding event Rich describes.

On Tuesday afternoon, along with Richard Fleisher, Rita and I were fortunate enough to see two prey captures, not many minutes apart, by the parent Red-tailed Hawks. In each case, in what seemed like a casual and effortless motion, the hawk swooped low over the ground and picked up a mammal that had been concealed from our view in the lawn in front of the library. We, too, thought the prey was a mouse or small rat. One of these carcasses was given to a fledgling hawk who took it to a tree on the lawn, south of the east end of the library. The young raptor lost its grip on the carcass, which fell to the ground, and followed it to the ground. It was only as we watched the youngster consume the carcass, in the mulch area at the base of the tree, that we realized the prey was a black squirrel. Our initial mistake was not difficult to understand. As it was seized by the adult hawk, the squirrel looked so much smaller than its captor that a misperception of its size was quite natural.

As the young hawk (female?) steadily pulled pieces of flesh from the carcass, a noticeably smaller sibling (male?) flew down to the mulch patch, walked over to the eater and remained nearby for many minutes. Although it seemed to look longingly as its larger sibling ate its dinner, it made no attempt to grab a morsel for itself. Was it expecting a handout? None was offered. After a while, the smaller hawk wandered over to the edge of the grass, pulled up a worm and ate it. We saw it do this twice. It took about 30 minutes for the larger hawk to consume most of the squirrel. We half expected it to turn over the remainder to its sibling, a behavior we had seen many times among fledgling Peregrine Falcons. No such thing happened. Once the carcass had been reduced sufficiently, the hawk proceeded to swallow it, fur and all, head end first and bushy tail going down last. The hawk was unable to complete this swallow in one motion and, for a while, the end of the tail protrude! d from its mouth. Finally, it was done. What about its smaller sibling? We left the grounds at 6 PM, confident that, if the smaller youngster was in need, its parents would provide.