Chocolate: A Culinary Gift from the Amazon

Posted in Exhibitions, Science, The Edible Garden on July 30 2009, by Plant Talk 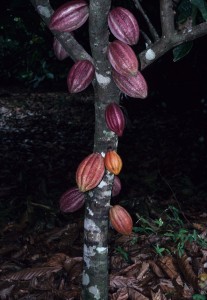 The chocolate that we eat and drink is one of the most complicated foods utilized by mankind. Not only did it co-evolve in the rain forests of the New World with still unidentified pollinators and with the help of animals that disperse its seeds, but it also undergoes an amazing transformation when it is processed, going from inedible, bitter seeds to the delicious chocolate products that most of us enjoy.

I became fascinated with the natural history and cultivation of chocolate while working for the Cocoa Research Institute in southern Bahia, Brazil, from 1978 to 1980. I directed a program of plant exploration in what was then, botanically, one of the least explored regions of the New World tropics. During those two years, I made 4,500 botanical collections, including many species new to science and many from cocoa plantations.

One of the unsolved mysteries of the natural history of chocolate trees is its pollinators. Most varieties of chocolate are self-incompatible, which means that pollination of the flowers of a given plant with pollen from the same plant does not yield fruit. There are, however, some varieties that are self-compatible—the single tree growing in the Enid A. Haupt Conservatory at NYBG is proof, because it sets fruit. Nevertheless, for most chocolate trees to produce fruit, pollen has to be moved from one tree to the next. This does not happen frequently in plantations, because the average tree produces between just 20 and 40 fruits each year from the thousands of flowers that open on the tree.

Although chocolate and cocoa can be made from the seeds of most species of Theobroma, T. cacao is the only one cultivated on a worldwide, commercial scale. Most botanists agree that the original distribution of the chocolate tree was restricted to the New World tropics; however, today chocolate trees are found in most areas of the world with climates similar to those of forested areas of the Amazon Basin. What is not clear is exactly where chocolate originated in the New World. Some scientists believe that it was originally found from Mexico south into the Amazon while others contend that it was native to the Amazon from where it was introduced into Mesoamerica. It is also believed that the native Amazonian trees were exploited by humans only for the refreshing pulp surrounding its seeds. I have often broken open the fruits to suck the tasty pulp from the seeds, and in Brazil suco de cacao (cacao juice) is made by placing the seeds and the surrounding pulp in a blender with milk and sugar to make a delicious drink. The fruits, which grow from flowers along the trunk (see photos), are opened by monkeys and other animals that eat the pulp and spit out the bitter seeds, thereby dispersing them away from mother trees.

Unless the seeds are fermented, they taste bitter, which dissuades animals from eating them. However, after fermentation the seeds develop the characteristic aroma and flavor of chocolate and lose their bitter taste. There is ample evidence that the seeds were used to make a chocolate drink by the Maya in Mexico at least as early as 600 B.C. Their beverage, however, had little similarity to the hot chocolate of today because chili peppers were added to the drink, which made it bitter. Other ingredients included in the early Mesoamerican versions of chocolate drinks were vanilla (Vanilla planifolia Andrews), corn (Zea mays L.), and a red coloring called annatto (Bixa orellana L.).

Today’s chocolate bars and cocoa are produced in the following general way, but keep in mind that chocolatiers have their own recipes. The fruits are cut from the tree and split open with machetes to extract the seeds surrounded by the white pulp. Next, the seeds are put into wooden boxes to ferment for usually three to six days. The fermentation causes the development of the characteristic aroma and flavor of chocolate, and in the breakdown of the white pulp surrounding the seeds. The beans are dried, either in the sun or in ovens, and the remaining pulp is removed.