Garden News: Behind the Grill with Mario’s Chefs

Posted in The Edible Garden on August 19 2013, by Matt Newman 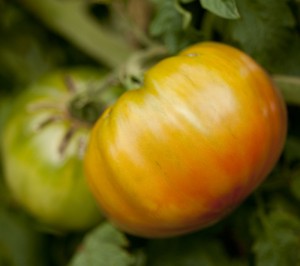 I’ve done a lot of talking about the sensational culinary experiences to be had during this summer’s Family Dinners with Mario Batali’s Chefs, but until now I had few ways of showing you first-hand just what goes on in the garden, behind the grills, and at the table. Thankfully, Kevin Character was on hand during last week’s evening event to take a spin around the Ruth Rea Howell Family Garden and talk to some of the talent in attendance.

In talking with Andy Nusser, Executive Chef at Tarry Lodge, it’s clear that this hefty undertaking is nonetheless carried out with all the care and attention to detail that have made Mario Batali‘s restaurants havens for modern gourmands. There’s definitely more to come during this ongoing MasterCard Priceless series, but for now, have a look at how we’re doing things during the summer harvest. It might pique your palate!

Our next Family Dinner events take place on September 21 and 29, so there’s plenty of time to pick your date. But keep in mind that tickets have been going quickly, and we expect the trend to continue. MasterCard holders can visit Priceless NY for more information or to register for the events. We’ll have more on upcoming menus as we get closer to September, so stay tuned!

Posted in Adult Education, Around the Garden, The Edible Garden on January 19 2012, by Joyce Newman

Just in time for Valentine’s Day, sign up for “The Temptation of Chocolate” with NYBG expert Jessica Bohn, Saturday, February 11 at the Midtown Education Center. 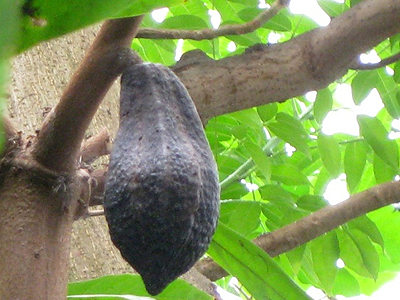 Did you know the main ingredient in chocolate comes from the fruit of the cacao tree? Perhaps you read our earlier article on “cauliflory” in trees like this one. Lucky for us there are cacao trees (Theobroma cacao) thriving in The New York Botanical Garden’s tropical rainforest, a part of the Enid A. Haupt Conservatory. In fact, two of our cacao trees now have cocoa bean pods growing on them, each one about six inches long and dark brown.

Let’s Hear it For Youth Gardens!

Posted in The Edible Garden on November 23 2010, by Plant Talk 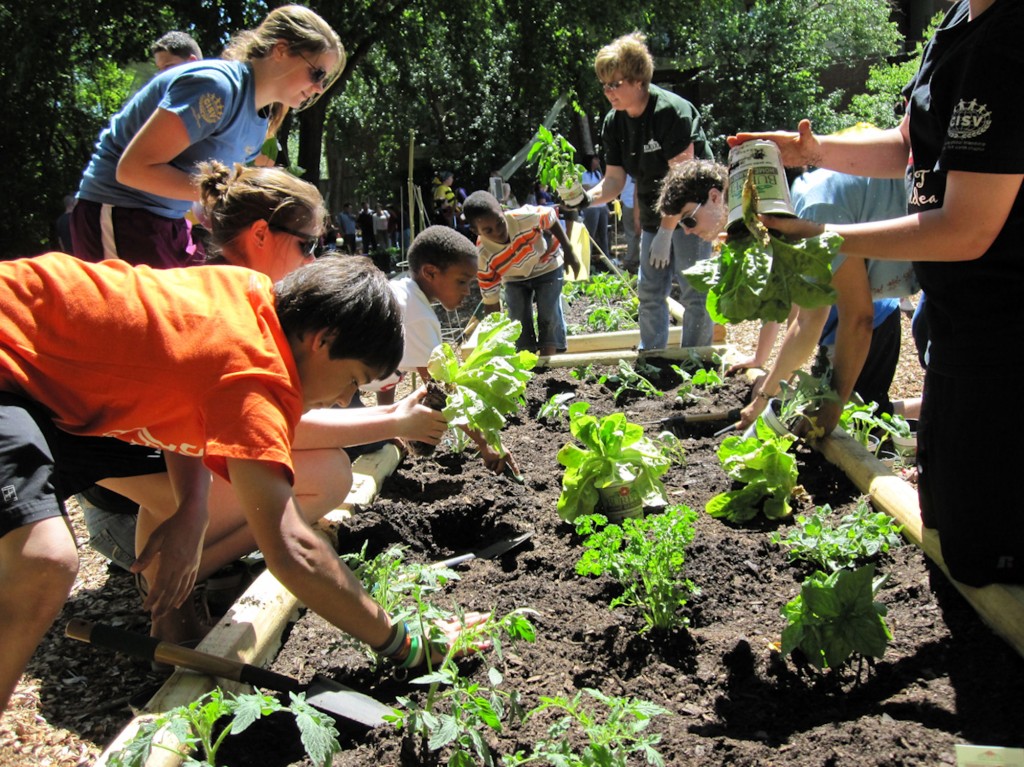 Getting kids to make healthy food choices can be a struggle. One of the best ways to encourage children to eat more fruits and vegetable is to provide them with a sense of ownership and understanding of where their food comes from. Children-focused vegetable gardens are a great way to start.

In 2010, Burpee Home Gardens was happy to sponsor a handful of community and youth gardens all over the United States through its “I Can Grow” initiative. We saw the excitement in the participants’ eyes, and we were honored to be a part of programs like The New York Botanical Garden’s The Edible Garden, where the interest in cooking with home-grown produce was celebrated.

Now we’re thrilled to be offering even more chances for youth- and education-focused gardening programs to get the funding and plants they need to be successful and fun. The 2011 “I Can Grow” Youth Garden Award will support and sponsor urban school and community youth gardens with vegetable and herb plants, garden layout expertise, event promotion, and of course money for supplies!

Learn how to apply for this award below.

Posted in Exhibitions, The Edible Garden on October 21 2010, by Plant Talk

What makes a good olive oil? What’s the deal with whole wheat pasta? How much should I pay?

The “Master of Molto Gusto” paid us a visit last weekend and took time to answer all these questions and more. Here are some amazing images from last weekend’s event, so check it out if you missed it . . .

To see Mario answering your questions, check out the video below.

Posted in The Edible Garden on October 18 2010, by Plant Talk

And the feeling is completely mutual!

The celebrity chef and philanthropist came to The New York Botanical Garden on Saturday to do a cooking demo for the finale weekend of The Edible Garden.

Just before thrilling the audience with his amazing food, anecdotes, tips, and tricks, we got a few minutes to ask Mario what he likes about the Botanical Garden.

Turns out: He likes the Garden quite a bit. We’re blushing!

Mario loves us! He really loves us!

Stay tuned for more from Mario’s demo. We’ll be posting another video soon, and recipes, too.

Posted in The Edible Garden on October 15 2010, by Plant Talk 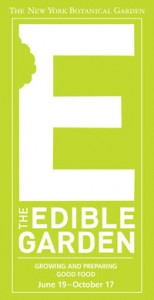 After a stellar summer full of produce, cooking demos, and celebrity chefs, The Edible Garden is nearing its end, but not without one final, jam packed weekend.

On Saturday catch a cooking demo with Mario Batali at 12 p.m., Michael Psilakis at 2 p.m. and Marc Forgione at 4 p.m.

There will be booksignings and samples on the Tasting Terrace both days.

And once you’re back home, keep the spirit of The Edible Garden alive by trying one of these fantastic recipes.

Use Your Bounty to Make Garden Wines

Posted in Exhibitions, The Edible Garden on October 14 2010, by Plant Talk 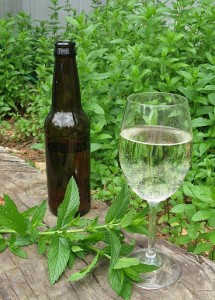 I’m three years into a new garden, a tiny bungalow yard near downtown Asheville, N.C., that I have crammed full of dwarf fruit trees, berry bushes, fruiting vines, roses (for edible petals and nutritious “hips”), yuccas and sunflowers, short and tall herbs, and even a few vegetables.

It’s shocking how much produce the family has had this year despite searing temperatures and a shortfall of rain. Now that I have written a garden book about edible landscape design and how to preserve the harvest, readers I meet are pushing me to try more, learn more, and share more information. So now I’m moving into wines.

Garden wines are nothing new. People in ancient times made wine or the honey-rich fermentation called mead out of everything they grew: grapes, of course, but also pears, peaches, quince, plums, crab apples, berries, numerous herbs and flowers, vegetables and root crops, tender new leaves, and even grains and onions.

Mario Batali and the Garden Team Up for a Special Contest!

New York’s favorite orange Crocs-wearing chef is coming to The New York Botanical Garden on Saturday, October 16, and we couldn’t be more excited!

So to celebrate we’re running a contest in conjunction with the King of Eataly himself.  All you have to do is “like” both The New York Botanical Garden and Mario Batali on Facebook, and then leave a comment on both pages answering a simple question: What would you like to have Mario Batali cook for you if he were to come to your house? On the The Garden’s page, base your answer on this post.

On Mario Batali’s page, base your answer on this database of recipes.  And that’s it!

Only people who leave a comment on both pages by 1 p.m. Friday, October, 15 will be entered into a drawing from which one winner will be chosen at random. We’ll announce the winner on Friday afternoon on Facebook.

What’s the prize you ask? If you’re in New York City, we’ll reserve two front-row seats at Batali’s cooking demonstration just for you and a guest, plus you’ll receive a special gift from Mario. Not in New York? Never fear! You’ll still get the gift from Mario Batali, plus a little something from us!

So remember: Don’t leave a comment here, leave it on each of the two Facebook pages. Buona fortuna!

Mario Batali loves food.  I know. I once, quite by mistake, was fortunate enough to follow him and his wife around the Union Square Greenmarket here in New York City. My husband and I were shopping for dinner and were quite focused on the task at hand, but we kept bumping into the chef and his wife. His love of the market, the farmers and the community surrounding it was obvious. Here was a man who truly loves food.

I see this same love, dare I say gusto, in Mario’s selections for his raised garden bed in the Home Gardening Center here at The New York Botanical Garden. The inevitable waning of the growing season has naturally dwindled the selection remaining in the garden, but everything that is still in there is beautiful, fragrant, delicious and just begging to be cooked. When I go to visit the Home Gardening Center (it’s quite near the Cafe, and a lovely place to stroll around for a few minutes after lunch) I love playing a game with the Celebrity Chef gardens planted in conjunction with the Edible Garden: If so-and-so were to come to my house tonight to cook me dinner, what out of this garden would I ask them to cook?

Head below the jump for an exciting chance to win front-row seats to Mario Batali's cooking demo at The New York Botanical Garden Saturday, October 16!

Posted in Exhibitions, Programs and Events, The Edible Garden on October 8 2010, by Plant Talk

Fall is in the air, and The Edible Garden’s season of celebrity chef cooking demonstrations is fired up! The star-studded Columbus Day Weekend (Saturday through Monday, October 9–11) lineup at the Conservatory Kitchen includes television chef and acclaimed cookbook author Lidia Bastianich, restaurateur and school lunch reform advocate Bill Telepan, and Wholesome Wave CEO and Dressing Room chef and owner Michel Nischan. All of the chefs will be cooking with pumpkins, squash, or gourds, and their children or grandchildren will join them on stage to share in the culinary excitement.

There will be plenty of delicious samples of sustainably produced food on the Tasting Terrace, booksignings by chefs and gardeners at the Cookbook Collective, guided tours of the four kitchen gardens, and musical performances to round out your visit!

An added bonus is the kickoff of Halloween Hoorah —a frightfully fun journey with creepy crawlies, pumpkin patches, spooky scarecrows, and more in the Everett Children’s Adventure Garden, on through October 31. New this year, artist Michael Anthony Natiello has carved and sculpted more than 500 pumpkins into a ghoulish menagerie—scarecrows, snakes, and spiders, oh my! All day all weekend, get hands-on with applesauce making, seed sorting, and apple stamping, and stop off for a play break in the pumpkin playhouse. Plus, there’s even more fun scheduled each day, including cider pressing, the family favorite Pumpkin Parades, and performances by the Alice Farley Dance Theater.

Even Shop in the Garden is dressed for the season, with new items such as Katchkie Farm Thunder Pickles, Acorn Windbells, and the NYBG in Flower 2011 Calendar. Save 20% off anything in the fall category when you shop online and use the promo code SHOPFALL through October 31.

Plan your Columbus Day Weekend today. Get Your Tickets