Posted in Learning Experiences, People on January 7 2010, by Plant Talk 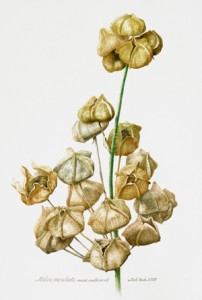 Best-in-Show from the Royal Horticultural Society, the Dianne Bouchier Founder’s Award for Excellence in Botanical Art, president of the American Society of Botanical Artists—with these accolades it would be hard to guess that instructor Dick Rauh had a career in motion picture special effects and graphics before he began to pursue botanical illustration.

When his wife enrolled in floral design classes at The New York Botanical Garden, Dick, too, began taking classes at the Garden, a little before retiring. He had always liked to draw trees, and while he was taking gardening classes, NYBG was starting its Botanical Illustration program. Dick began taking the art classes and by 1986 had completed his Certificate in Botanical Art and Illustration.

Dick’s connection with the Garden deepened as he continued to study. Because he was creating illustrations for scientists, he took botany classes to gain a better understanding of the plants and their makeup and also earned a doctorate in biological sciences from CUNY.

By 1994, Dick had begun teaching illustration, which he describes as a learning experience. “When you teach you suddenly realize what you don’t know,” he commented. This recent painting of Malva moschata, musk mallow fruit (pictured above), will be in this year’s Focus on Nature exhibition, at the New York State Museum in Albany.

To this day, Dick is still learning and teaching at The New York Botanical Garden, which for him has been a “marvelous experience.” He has also taught guest workshops at gardens and arboreta around the country, has had work featured in countless shows, and has illustrated fellow Garden instructor Carol Levine’s A Guide to Wildflowers in Winter.

Under his direction, the American Society of Botanical Artists will be moving its headquarters to the Garden, so he will be spending even more time here.

Samples of Dick’s work, including seed pods, flowers, and trees, can be seen at Science-Art.com

To sign up for a class taught by Dick, click here and enter his name in the search tool.