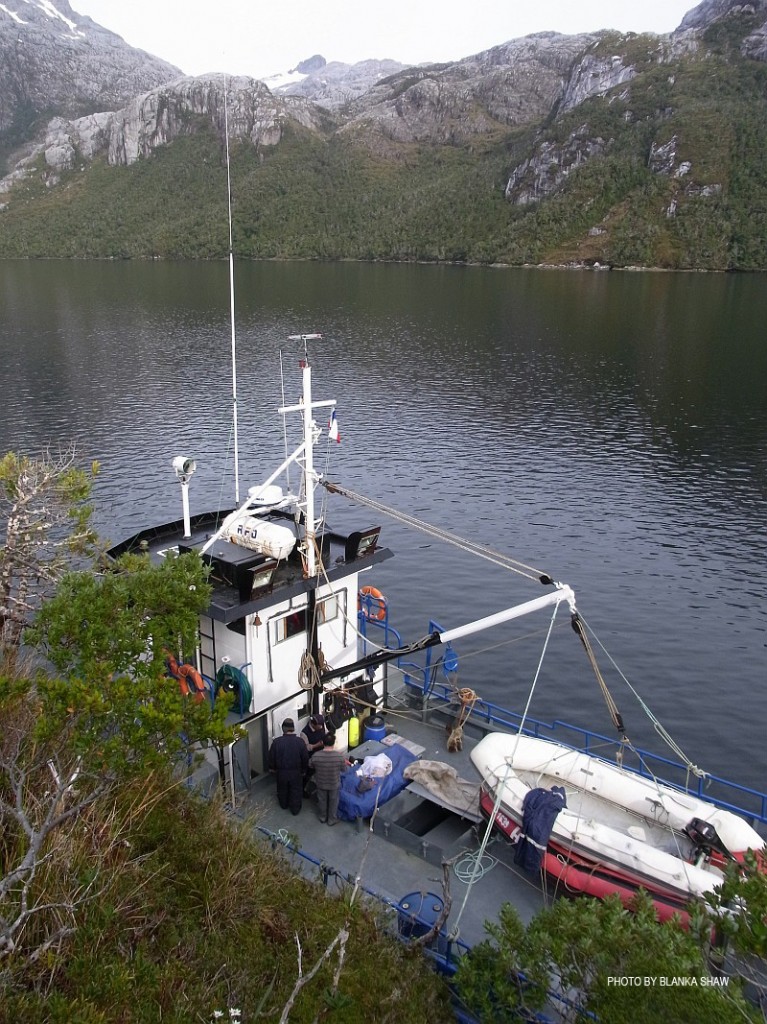 After what seemed like an eternity of waiting (but was actually only five days), we were finally ready to leave.

We transported all our gear to the port and loaded it aboard our ship, the Don Jose Pelegrin, a commercial crabbing ship. The austral summer is when crabs breed, so crab fishermen are not able to fish, and we are able to rent this ship. In winter the ship works the sub-Antarctic seas catching the Southern Hemisphere equivalent of the Alaskan king crab (think World’s Deadliest Catch).

By any standard, this is a small ship (but obviously seaworthy). It is about 55 feet long by 17 feet wide; there is a small galley and from there you can access the bridge above or the bunkroom below by ladders. The bunk room is decidedly claustrophobic since I am unable (at 6 feet) to stand up in it. The 10 bunks are arranged in the shape of a capital E (my bunk is the lower one on the lower half of the upright of the E). It is something of a contortionist act to get in and out of the bunk, and once in the bunk there is well less than a foot from your body to the bunk above. Fortunately I am not inclined to claustrophobia since my attitude is that once I close my eyes, it doesn’t matter if it is 10 feet or 1 inch from me. At my request the hold that keeps the crabs has been fitted as a moss drying room. There is a small bathroom with a toilet and sink (no bathing facilities!) but today the toilet broke and so we need to go ashore in the woods for our bodily functions.

So, about 4 p.m. yesterday the ship pulled away from the dock and headed south down the Straits of Magellan. Our goal on this trip is to collect in the wet, western part of our flora region on both the north and south shores of the Brecknock Peninsula. Our trip will be tackled in two stages and which shore we hit first will depend on the weather, because to round the peninsula there are unsheltered stretches where the ocean can be very rough.

I told the captain that it was his decision. He said that since we were motoring all night, we would reach the point where a decision had to be made at around 4 a.m.. The rocking of the ship put us to sleep. We awoke in Seno Bluff, the easternmost sound on the north shore of the peninsula that we intended to sample. As soon as we stepped outside we were all in awe. The sheltered cove where we were anchored, Puerto Saco, is completely surrounded by mountains. All the mountains are topped by glaciers and innumerable waterfalls cascade down the steep slopes. The low clouds and fine rain added to the mystique.

It took a while to get organized because it was our first collecting locality: the collecting pack was in one place, the GPS was in another, the paper bags in another, etc., etc. From the ship we picked two sites and divided into two groups in order to find more mosses. Even from the ship, huge colonies of mosses and liverworts could be seen on the trunks of the southern beeches (Nothofagus). The excitement was palpable as we were about to go ashore. For a bryologist, this is a paradise. The biomass of bryophytes, in this area that receives about 12 feet of rain a year, is much greater than that of the trees. The ground is at least a foot deep in bryophytes and the bryophytes sheathe the tree trunks to more than twice the diameter of the trees themselves.

We had scheduled four hours of collecting before returning to the ship for lunch, and we all used every minute. Hardly a moment passed when something didn’t catch my attention. The wet forest demanded good rain gear, but I couldn’t resist kneeling in shallow water to find and collect the small mosses and liverworts growing under the herbaceous plants in a floodplain along the glacier-fed river. Reaching into the river to retrieve mosses growing on submerged rocks reinforced the origin of the water since in only moments my fingers became numb. However, the lure of small, regional specialties was too much to resist. With the high rainfall in the area, the liverworts dominated both in terms of diversity and biomass. However, moss diversity was also high, but most species were in small quantity and infrequent occurrence, making it like a treasure hunt. By lunch time my collecting bag was full (100 collections!!) and hard to manage since all were water-saturated.

After lunch, while the crew was preparing the zodiacs for moving to the next site, I was able to process my collections so that I was ready for the next site. It took less than half an hour to reach our next site, the next arm to the west of the same sound. Although some of the species were the same, it was also completely different in aspect because here there was no forest, but rocky slopes. Since the sun doesn’t set here until 10 p.m. we were able to stay out until after 8 p.m.

The sun is now setting on our first day, but we’re still glowing from the excitement.

I am reading with great interest your adventures collecting mosses and liverworts in Tierra del Fuego and would like to know how a place so wet became known as the land of fire?

To make 100 collections in a single morning of collecting is an amazing accomplishment, especially considering that you still had the afternoon to collect another 100 or more! The only NYBG botanists to have gathered more collections of plants in their careers are the late Bassett Maguire (65,172 collection numbers) and the currently active Michael Nee (57,173 as of 17 July 2010). With 56,435 collectiion numbers before you left on this trip, you should pass Nee in the next several days and gain ground on Maguire by the end of the trip. I should, however, point out to others following this blog that Maguire and Nee gathered flowering plants and those take more time to collect and to process than do bryophytes which only have to be stuffed into a bag.

I know that you don’t care much about how many collections you make in relation to others, but the more botanists collect the greater our knowledge of the world’s plants becomes!

I am glad to learn that you are finally in the field. Hope the toilet is fixed soon. By the way, is Barbara Hurd on this expedition? If so, Jerri Dell sends her best.

Stay dry and keep a sharp lookout for Sphagnum. Perhaps more than three species will be found.