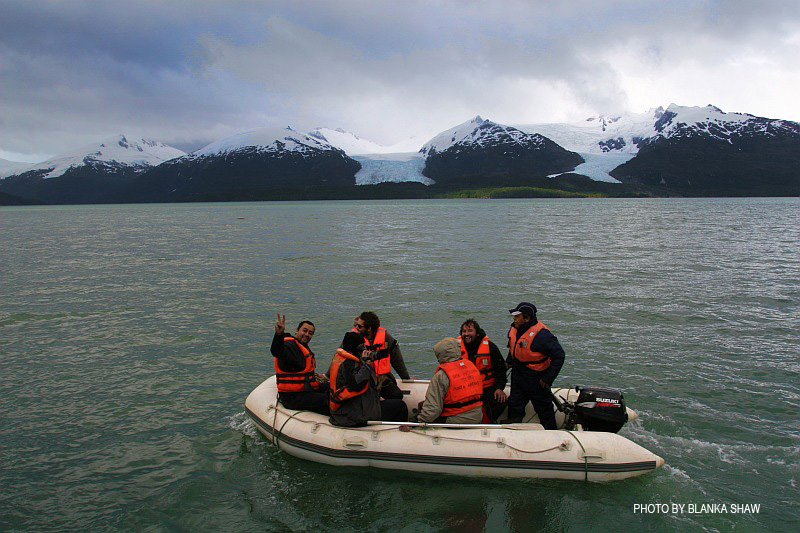 The weather caught up with us today. I’ve hardly mentioned the weather, up to this point, because it is such a part of the region that it’s easy to take it for granted. Prior to the trip I warned everyone to be prepared for temperatures around 50ºF, 40 mph winds, and rain. Until today we had been lucky. By that I mean, it has been cool, and somewhat windy, but with only occasional light rain. Here, this is considered good summer weather! Yesterday, our first full collecting day, the weather was cool and breezy with intermittent light rain. Last night when we were discussing the day among ourselves, some of our group hadn’t even noticed that it had rained at all, and it probably rained about a third of the time in the morning. But it was only a light rain and the vegetation is permanently wet, so a little more water was easy to overlook.

Early this morning we left Seno Bluff for the next sound to the west, Seno Sargazos. It was calm waters and overcast but not raining. Right after breakfast we went ashore and collected for several hours along a lake-fed river. I asked the Chileans what they would call the vegetation and was told it was called Magellanic tundra. What a good name! There were only patches of trees in small ravines, the landscape mostly consisted of tussocks of herbaceous plants and bryophytes about 2 feet tall that are very spongy underfoot, with holes between the tussocks. Walking was slow and treacherous. However, collecting was good and we found some real sub-Antarctic mosses.

During lunch we moved the ship to the next sound west, Seno Brujo. Our goal was to get to the southernmost end of it and then work up a river to a large lake we could seen on a map. I guess the rough seas between the two sounds should have been an indication that the weather was changing. When we arrived it was raining hard, but wasn’t too windy, and we decided to go collecting at least for a couple of hours. However, as we suited up in our rain gear, the weather worsened. Once we were standing out on the deck, ready to board the zodiac to go ashore, the rain became torrential and the wind picked up, driving the rain almost horizontally. When it hit your skin it felt like sleet because of the force as well as how cold it was.

The waters were rough with white tops being driven up by the wind. I made an executive decision that we would not go out in the afternoon, much to everyone’s relief. So, we’ll spend the night here tonight, in a slightly more sheltered cove, and go out in the morning. In this part of the world the weather is always a factor, but it is this very weather that results in such lush bryophytes. It is also the reason why the area is uninhabited and the landscape is so stunningly spectacular. But that can wait for morning!