Posted in Gardening Tips on September 27 2011, by Sonia Uyterhoeven 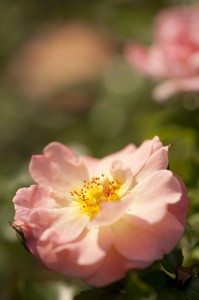 Many people think of June as the month for roses. And while it’s true for many, here at The New York Botanical Garden we generally have two peak seasons for our roses. They first come into their glory in late-May, with both the repeat flowering roses and the one-time blooming old-fashioned types exploding with color and fragrance throughout June.

The repeat blooming roses take charge for the rest of the season; some of them flowering almost continuously, while others take a four to six week hiatus before re-flowering.

We expect a lot from the roses in the Peggy Rockefeller Rose Garden so we pamper them as much as possible. They are fed multiple times during the growing season with an organic rose fertilizer in April, again in late June immediately following flower, and one more time in early August. Compost tea is used as an additional foliar feed throughout the season.

Cow manure and Epsom salts are added to soil in the spring, and compost and worm castings are added later in the season to create a fertile growing environment. A loyal troop of volunteers come to the Garden every week, and under the careful supervision of the Rose Garden Curator, Peter Kukielski, they weed, deadhead, mulch, water, and fertilize the flowers in this beautiful, historical garden.

In mid to late-September we have an annual gala event for Garden Patrons in the Rose Garden. Six-weeks before the dance, the repeat-blooming roses are assiduously cut back so that they will shower forth with color on the evening of the event. Rose standards are staked in a uniform manner, pots are scrubbed, roses are groomed, the beds are lightly mulched and the paths are swept to perfection.

One of my best pieces of insider advice is to visit the Rose Garden the weekend following the dance (generally the third or the fourth weekend in September). You will find the garden full of color and in immaculate condition.

With all this pomp and ceremony in our main rose garden, it is easy to forget that the Botanical Garden also has a second, satellite rose garden which houses our Earthkind™ Rose Trial Beds. A handful of ‘low maintenance’ roses have been selected to be grown in this trial bed. They are disease resistant, cold tolerant, prolific bloomers, and generally tough customers.

The care expended on these trial beds is the exact opposite of what you find in the Peggy Rockefeller Rose Garden, in fact, the roses in the Earthkind™ trial bed are essentially neglected. These roses are never fertilized, sprayed, or pruned. They were watered by drip irrigation in their first year to help them become established, but have not since received any supplemental watering. Their only care is a 3 to 4 inch layer of mulch. The Earthkind™ trials began in Texas in the hopes of finding a truly low-maintenance rose. Trials are now being undertaken all over the country.

I have several favorites in this trial garden. The well-known ‘Knock Out’® rose that was hybridized by Radler looks fantastic. This self-cleaning rose flowers all season long and has a nice full habit. It is not surprising that it is a favorite for municipal plantings. The rose ‘Northern Accent Lena™’ and ‘Northern Accent Ole™ are two other winners. They were hybridized in Minnesota by Zuzek and are extremely cold hardy, disease resistant ever-blooming roses. The flower size is on the smaller size–from 1 1/2 to 2 inches wide–but they make up for it in flower power. These roses are smothered with blooms. The German hybridizer Kordes has several of his cultivars in these trial beds. ‘Larrissa®’ with its pink fully double flowers and ‘Mandarin Ice™’ with its orange-red blooms are two exceptional choices. For those of you looking for a groundcover rose, the hybridizer Meilland has a series of ‘Drift®’ roses. ‘Pink Drift®’ is grown in our trial beds and looks as good as it does in the Peggy Rockefeller Rose Garden.

While you cannot subject all of your roses to this severe treatment and expect them to perform, there are many roses on the market that are cold hardy, disease resistant, and floriferous. If you are searching for ideas, come visit us at The New York Botanical Garden. And if you can’t make it, check out this list of the 115 top-performing roses in the Rose Garden in 2010. September is a wonderful time to stop and smell the roses, virtually or otherwise!

Will the Rose Garden be open to the public in October and November.

I was there today, and I was surprised to see so many in bloom. Anyplace at the garden is nice to visit now, esp. without the high temps.