The Art of Gardening at Chanticleer

Chanticleer Garden, a 35-acre public garden not far from Philadelphia, is considered to be one of the greatest, most magical gardens in America. Open to visitors from April through October, Chanticleer’s six gardeners are responsible for the design, planting, and maintenance of particular areas of the property, including 15 distinct garden “rooms,” each on the scale of a good-sized residential garden, and each with its own look and feel.

Each gardener’s artistic vision is beautifully documented in The Art of Gardening: Design Inspiration and Innovative Planting Techniques from Chanticleer available at NYBG Shop (Timber Press, $34.95). Lavishly photographed by Rob Cardillo, and co-authored by the Chanticleer Gardeners, the book reveals the gardeners’ personal styles, as well as their varied approaches to color, to the use of sculpture and other media, to experimentation, and to choice of plants.

Sara Katz is the Community Horticulturist for Bronx Green-Up, the community garden outreach program of The New York Botanical Garden.

Now is the perfect time to start vegetable, flower and herb seeds in a sunny window indoors. You’ll get a jump-start on the growing season. You’ll save money starting from seed rather than buying transplants. You’ll grow what you like, whether heirloom, organic, or culturally-relevant crops you can’t find at the grocery store. One of my students, a Harlem community gardener, brought fuzzy cotton seeds to Bronx Green-Up’s Grow More Vegetables class. She’ll grow cotton to demonstrate the agricultural heritage of her ancestors.

Check out this time lapse of a radish seed sprouting, courtesy of Jacklyn Russell and Walker Howland:

Here is a quick guide to indoor seed-starting:

Posted in Gardening Tips on January 20 2015, by Sonia Uyterhoeven

The weather has grown cold and we’re well into the season of staying indoors. During this time of year, I often look around my apartment at the few forlorn houseplants (I have horrible light) and wish that I could do more to “green up” my living space.

For the next two weeks, I will cover houseplant basics. As part of my preparation, I sat down with Mobee Weinstein, a Foreman at the Garden who has been working here for over 30 years. Mobee is an avid houseplant gardener. We discussed some of her favorite houseplants and the ones that she grows in her own home.

Houseplants are easy to grow as long as you are grounded in a basic understanding of three important factors: (1) the plants needs, (2) your particular home environment, and (3) your abilities as the guardian of these living creatures. Today we will cover the basics of what you need to know before you get started, focusing primarily on light and water.

Green Invaders: What You Can Do

Posted in Gardening Tips on October 23 2014, by Joyce Newman 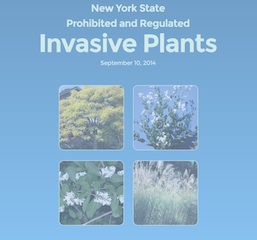 Fall is a good time to identify many of the common invasive plants and wildlife that may be threatening your garden. While you’re cleaning up your leaves and garden beds, you can spot the invaders including mile-a-minute vine, multiflora rose, Norway maple, oriental bittersweet, phragmites, porcelain berry,  Tree of Heaven, winged euonymus, and more.

Many of these exotic species were intentionally introduced from other countries more than a century ago. Some were used as packing material, while others just took a ride on ships from Asia and Europe. Some plants were cultivated for their ornamental value without regard for the fact that they could out-compete important native species. A detailed list of prohibited and regulated invasive plants in New York State with pictures is provided here.

You can learn to identify some of these invasive plants right in your own backyard and then report your findings by signing up on a new smartphone app, online database, and website called iMapInvasives.

Posted in Gardening Tips on October 9 2014, by Sonia Uyterhoeven 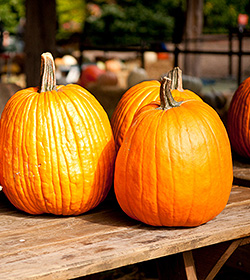 Every year, in celebration of Columbus Day and the advent of autumn, I conduct a Home Gardening Demonstration in the Fall Room of the Jane Watson Irwin Perennial Garden on autumnal centerpieces. Instead of getting my hands dirty, I get my hands gooey by carving exotic looking heirloom pumpkins and creating festive table arrangements.

I stand above the pumpkins with a sharp knife, grasp the stem for stability and start carving open the top. If you are carving a pumpkin with the intention of replacing the lid then you would place the knife at a 45-degree angle. Since I am carving with the intention of inserting a 4-inch square vase inside as a centerpiece holder, I carve straight down at a 90-degree angle. My objective is to create a clean edge and an area that is large enough so I can slip the vase in, leaving a small amount of wiggle room so that I can extract it with ease.

Gentle Giants in the Garden

Posted in Gardening Tips on September 23 2014, by Sonia Uyterhoeven

This year we have planted a number of varieties of elephant’s ear or taro (Colocasia esculenta) in the Home Gardening Center. Colocasia is sometimes confused with Alocasia macrorrhiza, which is also known as elephant’s ear or giant taro, but the two are quite easy to distinguish.

They both have massive foliage that looks—as the name suggests—like an elephant’s ear. The most identifiable difference between the two genera is that the foliage on Alocasia points upwards like an arrowhead, while the foliage on Colocasia points downwards to form the shape of a heart.

Earlier this year, I wrote about one of the Colocasia in the Trial Beds in the Home Gardening Center—C. ‘Electric Blue Gekko’. Now that the season has progressed, it is easier to make an assessment of the different varieties grown and to pick out favorites.

As Big as Satellite Dishes

Posted in Gardening Tips on September 2 2014, by Sonia Uyterhoeven

Last week I was on the Diller-von Furstenberg sundeck of The High Line, looking out at the Hudson River. From the sundeck you’ll find the closest and least obstructed views of the waterfront. The design of The High Line is broken up into different ecosystems, including a thicket, woodland, grassland, and a wetland area. The sundeck features plants found in marsh and wetland ecosystems. As you relax on the chaise lounges situated around the sundeck, it’s as if you are sitting amongst flora on the river’s edge.

I was leading an avid group of gardeners from my August Membership tour during this particular visit to The High Line, and we were admiring the rose mallows, of which the site has two different species. One is the swamp rose mallow (Hibiscus moscheutos ssp. palustris). This flower is commonly found growing on riverbanks, in freshwater and brackish marshes, swamps, floodplains, and wet meadows. It’s an adaptable native that doesn’t mind getting its feet wet, while it’s also tolerant of brackish water and deer resistant to boot. Swamp rose mallow has lovely pink flowers and makes a nice, full display on The High Line, tucked in with cattails (Typha laxmannii and Typha minima). It reaches 4-6 feet tall, flowers from July through September, and is hardy from Zones 4 to 9.

Clethra on the Cape

Posted in Gardening Tips on August 26 2014, by Sonia Uyterhoeven

Every year, I travel to Cape Cod for a family vacation. I find it heartening to return to the same location, as there’s a comfortable familiarity that cannot be replaced. I know the bike paths, the homemade ice cream store, the quiet beaches, and the customs of the changing tides. We spend a portion of our days riding on the Cape Cod Rail Trail—a bike path that spans from Wellfleet just past the old Marconi telegraphy station down to Dennis. As we ride along the spectacular Cape Cod National Seashore, I admire the local flora, which there seems to be mostly native and exactly where it should be.

I soak in the sights, admiring my beloved beach plum (Prunus maritima) and the much adored bearberry (Arctostaphylos uva-ursi) that grows with such elegance and enthusiasm in its native habitat. As I make my way down the rail trail, one botanical encounter that I have every year in early to mid August is summersweet. I know I’m getting close when I smell that sweet fragrance wafting through the air. It grows in abundance on the side of wet marshes and persists on the edges of shaded woodland paths.

Posted in Gardening Tips on August 19 2014, by Sonia Uyterhoeven

In Greek mythology, the goddess Persephone suspected her husband Hades, god of the underworld, of having a tryst with a nymph named Minthe. In a jealous rage, she transformed the lovely nymph into a perennial herb. Hades, unable to counteract his wife’s spell, bestowed Minthe with a sweet smell so that she would continue to delight those who came in contact with her.

Clearly, the aromatic qualities of mint are legendary. Through the centuries, mint has played an important role in many cultures, from the Greeks who rubbed mint leaves on their tables to welcome guests, to India, where it was strewn around temples and homes to clean the air. In the middle east, mint tea is often brought out to greet friends in the home.

Unlike many herbs that prefer sunny, dry spots, mints prefer moist soil in part shade/sun. As many of us know too well from experience, however, they are highly adaptable plants—and that’s putting it mildly. They grow in a wide range of conditions and are only too happy to expand their territory once they are planted in the ground. When I was a kid, my mother planted peppermint behind the vegetable garden; years later, the vegetable garden is gone, but the mint still thrives.

Posted in Gardening Tips on July 29 2014, by Sonia Uyterhoeven 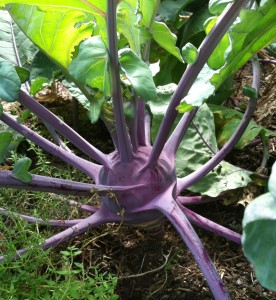 Some vegetables seem to have more cachet than others. Sometimes it’s due to their flavor, other times to their versatility of use. And sometimes, they simply look too cool to ignore…or perhaps I should say “kool.”

The curious thing about kohlrabi is that the majority of people have no idea what it is. Few even realize it exists. In terms of its popularity, it’s the runt of the cabbage family—until you lay eyes on it, of course. At that moment, it’s probably the coolest cole you’ve ever seen.