Jade of the South Pacific

Posted in Around the Garden on December 20 2011, by Marc Hachadourian

Marc Hachadourian is the Manager of The New York Botanical Garden’s Nolen Greenhouses for Living Collections, a staging area for plants for all of our gardens, yearly exhibitions, and events.

Walk through the Enid A. Haupt Conservatory and you may come upon a peculiar chandelier of a plant, with a vine spiraling right up to the roof and clusters of flowers dangling from it like upturned flamingo bills. You can’t miss the rings of vibrant, coral-red blooms. 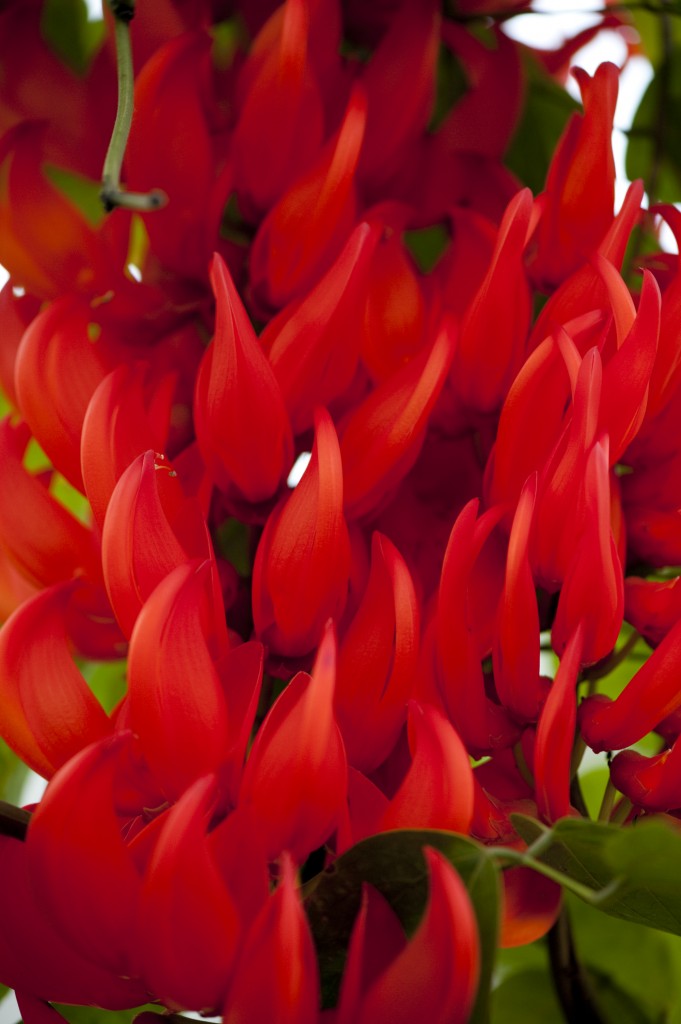 Commonly called the Red Jade Vine (sometimes the New Guinea Creeper, or the Flame of the Forest–it has so many names), Mucuna bennettii made its way to us two years ago, hailing originally from New Guinea. It was only after a summer growth spurt earlier this year that it reached mature florescence in the fall, and has since produced cascades of crescent flowers. Visitor or employee, you can probably understand why everyone is so fascinated by it.

But this vine isn’t the first of its kind to find a home here at The New York Botanical Garden. Another one of the Conservatory’s residents might almost be mistaken for the Mucuna‘s twin sibling, equally striking with its seafoam-green petals. The spring-blooming Jade Vine originates in the Philippines, and while it’s almost identical at first glance, it is actually a member of a separate genus known as Strongylodon. However, the differences aren’t many–each vine is a member of the legume family (like a kidney bean, if you can believe it) and shares a distant relative in the common Wisteria. In fact, residents of south Florida and other coastal areas may be familiar with some of the Red Jade Vine’s other relatives in the Mucuna genus: they’re responsible for the “hamburger seeds” or sea-beans that wash ashore from time to time. 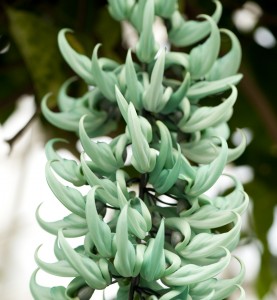 Through the 1940s and ’50s there was an effort to share these plants with the rest of the horticultural world, beginning with botanical gardens throughout the Pacific. The alien beauty of the Jade Vine’s claw-like flowers made it a shoe-in with Hawaiian locals, who had been using its native relative–Strongylodon ruber–to craft intricate flower leis for generations. Known as nuku ‘i’iwi, the bloom was considered sacred, and popular folklore suggested that any who wore a lei of Strongylodon without the love of the gods would be haunted by a woman carrying her own decapitated head under one arm.

I’m willing to bet these aren’t the same leis you see tossed around the necks of tourists at Honolulu International Airport. 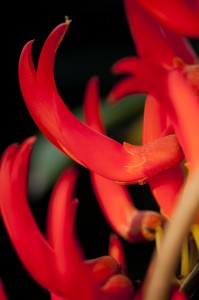 Thankfully, the Jade Vine (Strongylodon macrobotrys) found its fame through less paranormal means. We owe that to one Betty Lou Ho, who brought the blue-green flowers into the public eye with her intricate, 200-blossom leis produced in 1956 and ’57 for the annual May Day lei parade. Reports suggest there were no headless ghost sightings during the festivities.

As exotic as they are, growing either of these vines isn’t particularly difficult so long as you have enough space for it to thrive. The plant can be cultivated in a large container (as long as you give it a decent climbing medium) and makes for the most spectacular trellis cover if properly pruned, flowering at or around the two-year mark when well-tended. But for those with the room, giving it enough open soil to root freely makes for a much happier and healthier plant. There are even reports of Mucuna bennettii growing to over 100 feet long, with woody vines covered in meter-long clusters of bright flowers.

Keep in mind, though, that these are tropical plants with tropical preferences. In addition to needing a substantial amount of space, a warm spot to grow is also a must; the leaves tend to yellow and drop if the temperature falls below 55 degrees Fahrenheit. These requirements can make growing these vines a bit challenging in New York City, where not everyone has a spacious greenhouse attached to their studio apartment.

Right now is the best time to visit if you’d like to see our Red Jade Vine in full bloom. And for those looking to see the blue-green beauty of our original Jade Vine, think about stopping by through March and April for our much-loved Orchid Show–you might just catch it in blossom.

A great reminder that good things are worth waiting for!

thanks so much for posting this very entertaining and informative article…it is so enjoyable to learn how these plants are botanically related…almost like six degrees of separation!