Posted in Around the Garden on December 22 2011, by Matt Newman 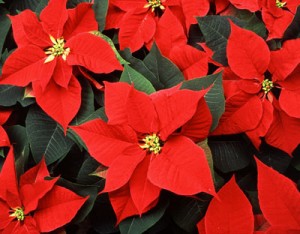 You probably run into them nearly every day. Hardware stores, supermarkets, pharmacies–almost anytime you step out the door to run an errand this time of year, you’ll see them lined up somewhere in the store. But the red velour leaves of the poinsettia weren’t always the face of December decoration they are today.

What’s the real story behind this ubiquitous holiday annual? I found myself mulling it over after someone told me about its deadly toxicity, a rumor that’s fed the newsmill with tales of poisoned pets and children for decades. The “fatal secret” belied by the innocent potted plant at the cash register, wrapped in cheery cellophane. Could such pleasant foliage be so dastardly?

The origin story of Euphorbia pulcherrima is simple enough, though you’ll have to set aside the Rockwellian vignette of a sweater-clad family roasting chestnuts in a blizzard; the poinsettia, for all its winter charm, actually comes to us from the steamy tropical forests of Mexico. Not exactly the best of buddies with the Norway spruce, as tradition would suggest. But the holiday history of the plant is real enough, finding its start in seventeenth-century Mexico with Franciscan friars, who would set the plants out during church ceremonies throughout the season. 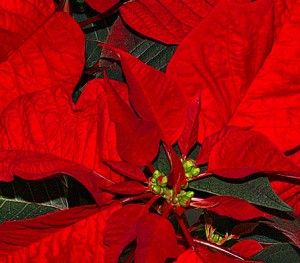 Of course, the story of how the plant found its way into our department stores is a bit less… well, holy.

It was the business savvy of a German immigrant by the name of Albert Ecke that established the poinsettia as a holiday staple in the U.S., owing not only to a rigorous marketing plan but also to a secret grafting method (his son’s, in fact) that allowed him to create the ideal hybrid–a combination of pot-perfect compactness and lush foliage. From the turn of the last century up until the secret was outed in the 1990s, no one could compete with the Ecke family’s poinsettias (much less their incredible advertising). Nowadays, there’s more competition in the market, but what about that upsetting rumor of the poinsettia being deadly poisonous?

If you’ve been fretting over bringing a chemical weapon into your home all these years, don’t worry yourself too much. The rumor of the poinsettia’s lethal toxicity is just that–a rumor.

It began in 1919 when a death was mistakenly attributed to those vibrant red leaves (the color you see is actually displayed in the foliage–more specifically the bracts–of the plant and not the flowers, as is often mistaken). Poinsettias produce a milky, latex sap containing chemicals which can cause stomach upset for some people if swallowed, and you don’t really want to get it in your eyes, either. But despite these little hiccups in its friendliness, there’s no truth to the suggestion that this holiday icon is deadly; there have been no recorded deaths, hospital visits are almost never necessary, and the American Society of Florists  claims that no other house plant has seen as many chemical tests as the humble poinsettia.

The result of all that research? A 50-pound child would have to eat around 500 leaves to suffer a toxic dose of the chemicals found in the Poinsettia. That’s a pretty ridiculous salad. So if you plan to put one out this year, you can be content to enjoy your leafy seasonal sill-sitter without any nail biting (though letting people chew on your houseplants is probably ill-advised to begin with).