Jabuticaba: Fruit of a Different Sort

Posted in Around the Garden on January 5 2012, by Matt Newman 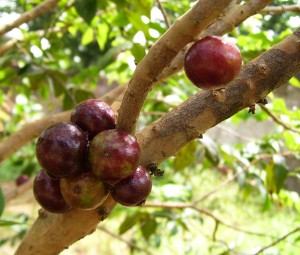 I had never seen a tree sprouting fruit from its trunk before. It seemed absurd. Why all the effort to push out those long, sprawling branches? Why not fruit like an apple, or an orange? The Jabuticaba I came upon while trolling Tumblr struck me as an evolutionary anomaly, at least up until the moment I was pointed toward a similarly peculiar tree in the NYBG’s own Conservatory.

But let’s first deal with the strange case of the Jabuticaba itself. Myrciaria cauliflora also goes by the simple but less entertaining alias of the Brazilian grape tree. (The native moniker has so much more rhythm to it, don’t you think?) And while to most North Americans it looks like something recently escaped from a genetics laboratory, our friends in South America are likely more familiar with the confused-looking tree and its delectable fruits.

The thin-skinned, edible purple produce of the ‘Sabará’ variety is a favorite of market visitors in areas from Brazil down into Argentina. Beyond its convenience as a hand fruit, locals use it for everything from jellies and jams to potent wines. That last bit is particularly important. By most fruit standards “jaboticabas” have a pitiful shelf life, meaning you’ll probably never see these plum-colored gems resting in a bushel at your local supermarket. Cultivating the tree in Florida and California met with poor results, and importing them would require a turnaround of less than three days counting down from the moment the fruit is picked; left sitting any longer and the Jabuticaba fruit begins to ferment in its own skin.

But why does this perplexing plant choose to grow fruit right from its trunk and inner branches? Try climbing a tall fruit tree bare-handed and you’ll have your answer (in the form of splinters, scratches, and possibly a new found height complex). For the Jabuticaba and other trees of its ilk, growing fruit from the trunk makes it more accessible to the animals that eat it, often ground-dwelling creatures that can’t climb or fly to reach food in higher branches. Propagating seeds is difficult without the local wildlife to eat the fruit and spread them around, making “cauliflory”–this trunk-fruiting behavior–an evolutionary boon. And it’s not quite as uncommon a trait as you might think. 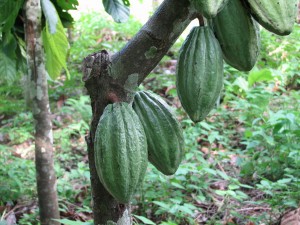 While getting ahold of the Brazilian grape proves a challenge without boarding a transcontinental flight, there’s one cauliflorous fruit almost everyone knows intimately, though perhaps not by sight. Maybe you can guess what I’m on about: it’s shaped like a football, grows near the equator, and has proven one of the world’s most prized crops for over three millennia. Scientists know it as Theobroma cacao, more commonly called the cocoa tree.

As helpfully explained by the Garden’s Francisca Coelho, Vivian and Edward Merrin Associate Vice President for Glasshouses and Exhibitions, the cacao tree’s trunk-borne fruit is a slightly different product of evolutionary necessity. Growing elsewhere simply isn’t possible for such large and heavy seed pods; just imagine all the snapped branches and unripened fruit littering the ground if cocoa pods grew like peaches. Of course, our cocoa tree in the Conservatory isn’t offering up any fruit at the moment, so we don’t expect to be enjoying homemade hot chocolate anytime soon. Sad, that.

I suppose you could say (and I will, much to your chagrin) that these peculiar trees prove one terribly literal point: you don’t always have to go out on a limb to find your reward.

Feel free to call the pun police any time now.