Posted in Gardening Tips, The Orchid Show on March 6 2012, by Sonia Uyterhoeven 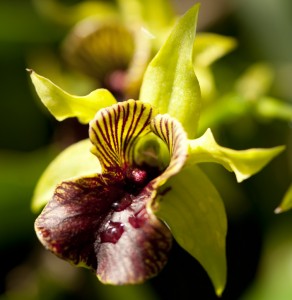 Last week we were discussing vertical gardens, or “living walls,” a specialty of French botanist Dr. Patrick Blanc. Since we are now in the midst of our spring Orchid Show, today we will explore why orchids are such good candidates for vertical gardening. With somewhere in the area of 70% of all orchids being epiphytic, members of the Orchidaceae family were destined to climb.

Orchids that dangle in the air–sometimes known colloquially as air plants–are classified as epiphytes. Epi- means “on top” and -phyte means “plant”–essentially growing on top of another plant. The relation the epiphyte has with the host is not parasitic (where it is harming the host), nor is it symbiotic/mutualistic (where both parties benefit), but rather commensalistic (where one benefits and the other is neutral). The term commensalism is derived from the Latin meaning “sharing a table.”

Like anything in life, adaptation to an aerial environment has its pros and cons. Plants grow in the upper echelons of the forest canopy in order to receive better light. They are also protected there from herbivores that roam the forest floor. But while the appeal for new accommodations with a spectacular view is enticing, the cons of co-habitation up in the forest canopy are significant. Orchids need to find a way to attach themselves to their obliging hosts. Without the ability to plant their roots firmly in the soil, they not only need to find a means of support, but also ways to effectively collect moisture and nutrients.

Epiphytes are a common phenomenon in the tropics. The plant’s adaptation to climbing is well-suited to the humid environment of tropical forests. Here, epiphytes obtain water and nutrients from the dust and moisture in the air and from dampness and debris on the surface of the host. Some of the roots of epiphytic orchids wrap themselves around their host, while others dangle freely in search of nourishment. 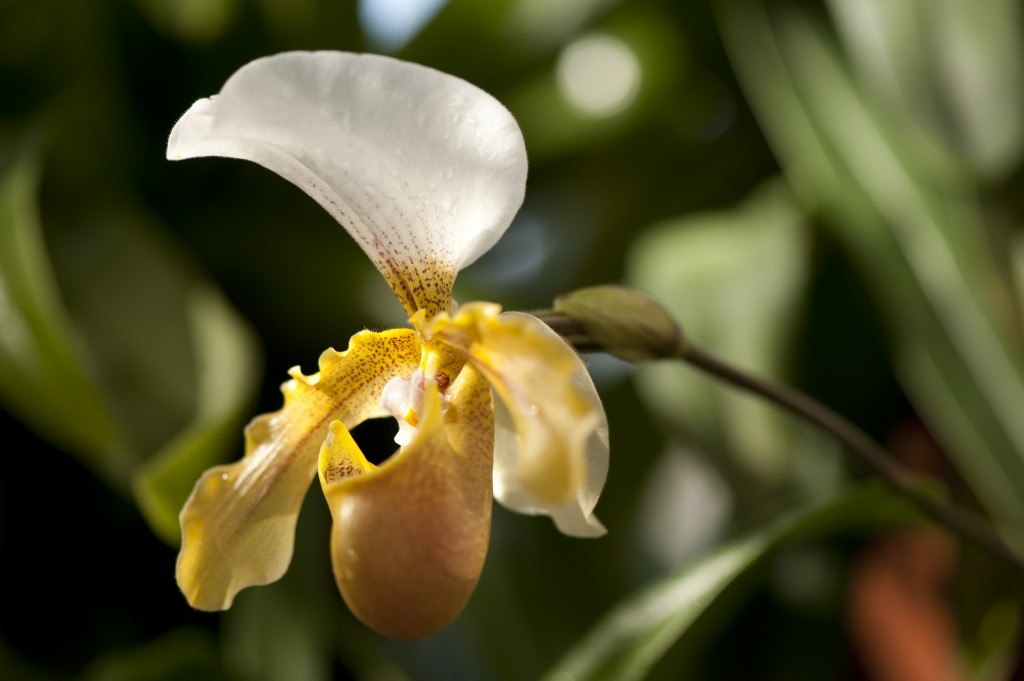 Orchids have what is called a velamen layer–a thick, silvery-white coating that covers the roots. However, the velamen tissues are in fact dead, filled with air that gives them a grayish color. Botanists believe that this layer is present to protect the roots and to help prevent water loss. Some people further suggest that the velamen coating acts like blotting paper, absorbing moisture from the surrounding environment to nourish the plant.

Epiphytic orchids have other adaptations that help them survive in their unique environment. Many of them have thick, waxy or leathery leaves. Some are slender and curl up on themselves, reducing the surface area and thus restricting water loss. Others look almost like succulents, with swollen leaves and pseudobulbs that store water for periods of hardship.

Many epiphytic orchids have a specialized adaptation called CAM photosynthesis (Crassulacean Acid Metabolism) to help them survive their harsh living environment. This is common amongst plants found in arid conditions. The majority of plants open the stomata on their leaves (pores used for gas exchange) during the day to take in carbon dioxide to photosynthesize. But when the stoma opens during a hot day, water escapes and evaporates through a process called transpiration (like sweating). CAM plants keep their stomata shut during the day to reduce water loss and then open them at night to collect carbon dioxide. The carbon dioxide is then stored as an acid (hence the name) and used for photosynthesis during the day.

Many botanists believe that a large number of epiphytes did not actually evolve from plants that inhabited the dark forest floors. They believe instead that their ancestors were plants which inhabited savannah grass lands near forest perimeters–they simply started to climb on the shoulders of their neighbors and eventually hoisted themselves up into a new niche. It is due to adaptive features such as CAM photosynthesis and the morphology of the epiphytic orchids’ leaves that this hypothesis has come about.

For the homeowner, the morphology of the orchid gives important clues to what type of care it needs. Thick, leathery leaves mean the orchid will prefer strong sun. On the other hand, thin leaves generally mean that the orchid needs to be protected from strong sun. A pseudobulb (swollen part on stem) is an indication that, in nature, the orchid fills up with water and then undergoes a dry period, so make sure not to overwater these chaps.

For more information on how to care for orchids of all types, stop by during Orchid Show weekends for one of my regular home gardening demonstrations, held Saturdays and Sundays at 3 p.m. in the Ross lecture hall.

The Orchid Show runs from now until April 22. Get your tickets now!