Posted in Around the Garden, Exhibitions on May 9 2012, by Matt Newman 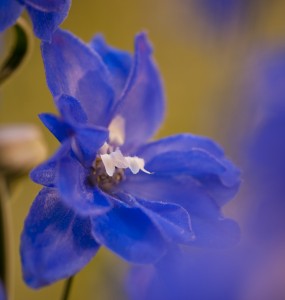 Claude Monet may have defined his career as a painter with the iconic irises and water lilies that sprung from his palette, but his garden at Giverny offered a menagerie of color and shape that reached far beyond his most common canvas subjects. And it does to this day: over a century later, a crack staff of gardeners still tends the dazzling variety of plants that makes up the Impressionist’s living legacy. This includes a collection of vibrant indigo flowers well-known to home gardeners, cattle ranchers, and one of the 20th century’s greatest creatives.

As May makes its case for cheerful spring weather, a prime example of the Impressionist’s varied tastes blooms at the NYBG‘s Nolen Glasshouses, awaiting the opening of Monet’s Garden. And if ever an eponymous color did its namesake proud, it would be that of “delphinium blue.” There are other hues in the plant’s repertoire, of course–lavender, white, red–but each understated alternate might seem almost banal in comparison.

Delphinium is also known as larkspur, a genus of the Ranunculaceae family with around 300 species under its umbrella. It was described as “lark’s heel” by Shakespeare, and knight’s spur by others (its monikers are many). And true to the classic notion of the beautiful and deadly, delphinium can be a killer if eaten in great quantities. It contains the alkaloid delphanine, which kicks off a number of unsettling maladies before a pitstop in the morgue. The threat of delphinium poisoning is especially real for cattle ranchers in the western United States, who will often keep their hungry herds away from high-elevation grazing ranges until later in summer, when the local delphinium is less toxic.

But for art’s purposes, it’s more about the aesthetic of the plant than its influence on lifespan. Few knew this as intimately as Monet’s unlikely New York contemporary: Edward Steichen.

As resumes go, Steichen’s is incomparable. You could say he sits among the pantheon of some of the greatest Renaissance men in recent history. He carried under his belt a successful career as the early 20th century’s highest-paid photographer, along with esteemed recognition as a painter, gallery curator, art aficionado and New York fashion maven. His service in World War I and II earned him distinction as commander of some of the most capable and prolific military photography outfits on the battlefield, and later work directing wartime documentaries garnered him an Academy Award. It’s safe to say he had the chops to justify his fame. But another passion of Steichen’s–horticulture–flew under the public radar.

It wasn’t until he retired as Chief of Photography for Vanity Fair and Vogue magazines that Steichen’s thirty-year obsession with delphiniums came to light. By that time he had taken the opportunity to develop his passion at his garden in Connecticut, and in 1936 he unveiled his newest works. Edward Steichen’s Delphiniums appeared in the Museum of Modern Art (did I mention Steichen later became their Director of Photography?) as its first and only exhibition dedicated to living plants. Familiar sprays of blue and purple flowers stood alongside towering racemes of white petals, unusual cultivars of Steichen’s own creation. Of course, the mind behind the production was already world-famous as a photographer; despite MoMA‘s best efforts to clarify the subject of the exhibition, arriving crowds were baffled by the fact that they were looking at potted plants rather than framed images.

Perhaps thanks to the confusing spectacle, gardeners still grow some of Steichen’s homemade delphiniums today, such as the popular ‘Connecticut Yankee’ cultivar. But his daughter Mary may best have summarized her father’s affection for his flowers, while further bringing home the thread of artistic pertinence that these striking plants carry through the decades, across continents and disciplines.

“The lovely garden created by my father came to mean as much to him as did the garden at Giverny to Monet–a bottomless well for creativity, peace, challenge, joy, inspiration, surcease, renewal–and sheer sensual pleasure.”

Beginning May 19, The New York Botanical Garden throws open the doors to a Giverny transported. Monet’s Garden is New York’s homage to one of the greatest living collections in France, and all that it did for horticulture as an artform. And it’s here that you’ll find that supernatural blue growing in abundance–the rich indigo that inspired Claude Monet, that touched Edward Steichen, and that may well set you on a path to growing delphinium in your own garden.

The New York Botanical Garden is competing as one of 40 New York City historic places in the National Trust for Historic Preservation’s Partners in Preservation program. Vote for us, and we have the chance to win a grant to restore a piece of Nature’s Showplace in New York City, the Rock Garden. VOTE FOR THE GARDEN!