Posted in Around the Garden, Wildlife on May 31 2012, by Debbie Becker

Debbie Becker has been leading weekly Bird Walks at the NYBG for over 25 years. You can often find her on Saturday mornings, guiding new and veteran “birders” alike through the Garden’s 250 acres with binoculars in tow. 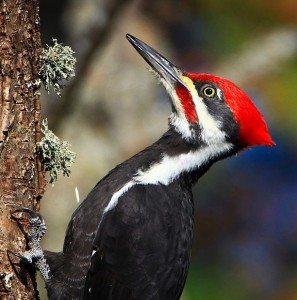 While leading my weekly Bird Walk at The New York Botanical Garden I observed a large woodpecker flying by me. I was able to see its wings with their black feathers and white markings. My first and only thought was that I had just seen a Pileated Woodpecker.

After leading birdwatching tours at NYBG for 27 years, the one bird that has always remained elusive is the Pileated Woopecker. Although they are common just miles north of the Garden, not many of these birds have ever been spotted south of Westchester County. But after careful research, I discovered that males wander during the month of April, presumably seeking new territory. It was on May 5 that I had what I hoped was a Pileated–the first for NYBG in decades.

My bird tour was walking slightly ahead of me when I decided to backtrack a bit, hoping to see if I could relocate the bird. It was flying fast and I didn’t think it had landed anywhere close by. With the early leaf out because of the warm weather, I was hoping it hadn’t disappeared into a leafy tree, or the back of a branch. I picked up my binoculars and scanned the Forest to be sure. The day was overcast with deep clouds threatening a heavy rain. But as I looked toward the horizon I quickly spotted a large silhouette in a tree far in the distance. I focused in and immediately saw the red crest. My heart skipped a beat! A Pileated Woodpecker!

While my heart was racing, my brain said, ‘Take a picture!’ I raised my camera with its 400mm lens and got off one shot before the bird took wing. Only a few seconds had passed between spotting it, focusing in, and snapping the photo, but I felt like I was moving in slow motion! Just then I came back to reality and started to yell “Pileated, Pileated!” as it flew over the heads of my tour members. I came running back to the group, happy to learn that many of the birders had seen it, while two said they saw a second bird flying in a different direction.

Ornithologist and New York State bird compiler John Bull states in his book, Bull’s Birds of New York State, that a Pileated Woodpecker was spotted in Bronx Park by George Komorowski in April of 1939. Could Bronx Park, which is very close to NYBG, be one and the same? An email from noted birder P. A. Buckley confirmed my suspicions. As someone who had studied under Komorowski in the 1950s, Mr. Buckley was able to add even more meaning to my chance sighting.

“At [the time of the 1939 record] birders never, ever called the Botanical Gardens anything but ‘Bronx Park,’ in contradistinction to ‘the Zoo,'” Buckley writes. “So I am sorry to report you can take it to the bank that [Komorowski’s] April 1939 Pileated was most assuredly nowhere else but in the Botanical Gardens.

“But still–it took 73 years for the second one to show up, so hats off to you for having found it! In 1939 it was just a wanderer, probably from Grassy Sprain Reservoir where I saw my first in 1953, and where there was a very small (one to two pair) breeding population. But now they are exploding and your one (or two?) could well be the vanguard of a breeding expansion into New York City.”

Old growth forests on the East Coast are not common, yet NYBG has preserved its 50-acre old growth Forest since the Garden’s establishment in 1891. The Garden leaves old snags, dead trees and fallen wood for birds, reptiles, amphibians and forest mammals, making it the perfect habitat for the Pileated Woodpecker.

I’m always asked about the Great Horned Owls as I begin my Saturday bird walks. They remain the stars of the show. But the definite runner-up and understudy is the elusive and fascinating “Woody Woodpecker” of birds: the Pileated Woodpecker. Perhaps it’s the desire to see a bird so closely related to the Ivory-billed Woodpecker, a large species so seldom seen in the past 70 years that the American Birding Association lists it as “definitely or probably extinct.” Nonetheless, sighting the Pileated at NYBG after a 73-year absence is certainly a feather in our cap!

A day after the sighting, anxious to see if I could locate the bird once more, I returned to the Garden accompanied by six fellow birders. We heard it drumming, but it was nowhere to be seen.

Ed. Note: What a brilliant first half of the year the Garden has had on the wild front! Not only has a decades-long truant come back to roost in the Bronx, but wood anemones were rediscovered here after over a century spent missing from the Forest. If these reappearances are any evidence, the Bronx River corridor is on the upswing, recapturing the diversity that makes nature in New York City so integral.

Debbie, a Pileated Woodpecker “attacked” the windows of my house in Ridgefield, Connecticut, on a day In May of this year. Tap tap tap. It is indeed a dramatic looking creature, a little scary. It has been fun doing the research that finally identified it. Yes, screechy, and seemingly disoriented it was. Maybe it had never been away from the deep woods near our house.

It may be that it saw its reflection in your window and thought it was another woodpecker. Most male birds are territorial -especially at this time of year -when they are breeding. Or, if your window has a lot of reflection it may have thought it was the woods or sky and attempted to fly through. If that’s the case you can simply cut a bird like figure from construction paper and tape it to the window or place a decal on the glass so that the woodpecker won’t think it’s flying straight through. They are certainly spectacular birds and we are quite honored to have one at the Garden after all this time. The bird walks begin Sept. 1 at 11am if you would like to join us.

i have seen these before in our backyard. but this morning they just looked extra beautiful…..and i couldnt get any pictures they were too fast and my phone camera isnt very good. But there was two of them here in our backyard in Pennsylvania this am :)

I live in Poughkeepsie NY ( town) and just observed a pair of these feasting along the base of my Ash trees. As I retrieved my iPhone to snap a few videos, the pair had split up.
One had flown between two trees, coming to rest momentarily in the upper branches long enough for me to snap a photo.

I believe they were attracted to my ever growing Ash-borer problem.

Just saw two flying thru my front yard today in Crugers, which is by the Hudson River in Westchester. It’s the first time I’ve ever saw these birds, tho I have seen other woodpeckers on a regular basis in the area.

Hello Dear Bird and Animal lovers. I kind of interested in a professional opinion you guys might have.
I live in Staten Island and just recently moved, but before that I lived right near the water. So few years back my next door neighbor moved leaving his cat behind, so I felt bad for and was buying some dry cat food and feeding it.
The cat adapted to living outside and before I knew there was another and then another, maybe after year the original cat was gone, but I kept on putting cat food outside in its usual spot. So it continued for 6, not really sure maybe even 7 years. I think I always noticed some different pack of birds picking from the pile, but for like last two years I saw that pack double maybe even triple in its population and I also think that all of those birds really became dependent on the supply. I’m talking about maybe a thousand of birds, the majority is common black bird I couldn’t name(not an expert), many different kinds.
Also I noticed that they follow me. I’m dead serious. I work on the ambulance and see them follow me all over the island, last month me and my girlfriend went to Atlantic City, like 2 Hour drive, we left at night and drove there non stop. So at my surprise sure next day when we were driving home I saw the very familiar flock take of the parking lot were I was parked all night and follow me home.
Thanks for reading.

I just spotted a pileated woodpecker for the first time! I had never seen one before and had no idea of what it was. Some research on the internet identified it for me. I like in Frankfort, NY (central NYS). I saw it twice during the day Saturday but not since. I hope it sticks around for awhile.

I live at Cedar Lake south of St Louis, Mo. We have pileated woodpeckers (2) at our feeders most days.

I just spotted one today in my yard in West Hills on Long Island NY. There may have been two of them. I was so taken back by it’s size and beauty. Wow glad I was able to snap a few photos with my phone ?