Posted in Around the Garden on August 22 2012, by Matt Newman

Not all home gardens are focused on the artful arrangement of their perennial plantings, or the ways in which the borders complement the patio furniture. Instead, it’s sometimes best to let form follow function. And I’m not just talking about the Gordian knot of cucumber vines in your vegetable garden! Of all the green conceits you can put to work in your yard, one of the most casual and native gardens you can grow is the one that will draw the greatest attention from your neighbors–though admittedly neighbors of a feathered variety.

Attracting hummingbirds to your plot is more than a game of luck; now and then you need to be proactive. And when it comes to inviting wildlife to your garden, it can’t hurt to start with a proven lure.

There’s a fireworks show taking place in the NYBG‘s Azalea Garden this month, thanks to a single native plant known as Lobelia cardinalis, or the “cardinal flower.” This colorful perennial is native and common throughout much of North America, springing up in wetlands from Texas east to Florida, and north to New Brunswick in Canada. So if you live on the east coast, you’ve already checked off one important box on the list of the lobelia’s growing requirements. Easy, right? In the northeast in particular, having a collection of lobelias in your burgeoning hummingbird garden is a sure step to attracting the Ruby-throated Hummingbird (Archilochus colubris)–the only North American hummingbird to nest east of the Mississippi.

The nectar-heavy flowers of Lobelia cardinalis are a delicacy to this bite-sized bird, and with the proper plantings you should soon have a private airport of winged nuggets zipping to and fro, bickering over territory, and generally being adorable from June through late September.

Lobelia cardinalis is so named for what might be an obvious reason, at least if you’ve ever seen the traditional vestments of the Vatican clergy. After being introduced to Europe in the 17th century, it’s believed to have been called the “cardinal flower” for displaying the same velvet red found in the garments of Catholic cardinals, and it is this rich crimson that makes it such an attractive buffet for North America’s hummingbird population. With Red-throated hummingbirds in particular, their preference for red flowers may be a deal-breaker if you’re thinking of growing these lobelias in their pink or white varieties, so keep that in mind should you decide to plant for visitors. 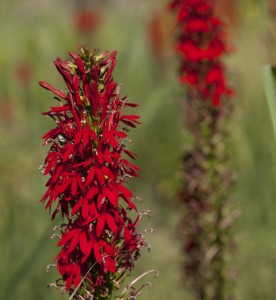 Lobelias prefer moist soil in partial shade, and make for an eye-catching border plant in addition to their bird-beguiling benefits. Being a perennial, cardinalis may survive in your garden for up to a decade, blooming from late summer into early fall and producing new plants near the older growths each year. Propagating them from season to season is as simple as replanting the sprouts to give them enough room to thrive. But, to avoid waking up one morning to an entire collection of lobelias having pipped their expiration date, it’s worth taking the time to start new plant lines from seed every four years. Hungry hummingbirds will thank you.

Of course, Lobelia cardinalis is only one in a crowd of hummingbird-friendly natives ready to make a showing in your home garden; others include coral bells, wild columbine, and jewelweed. And if you’re really looking to expand your personal “preserve,” there’s the butterfly population to think about–in that case, you might find yourself digging up lawnspace to plant asters, lantana, and even your own miniature meadow. But that’s for a future post!