Posted in People on September 5 2012, by Matt Newman 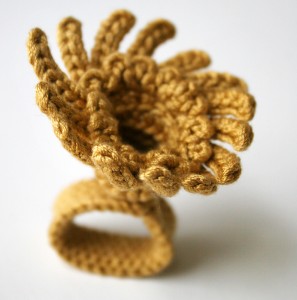 You’d have a hard time finding a lack of inspiration in Elena Rosenberg’s creations. You might see form and function wrapped up in a neat bow of elegance, but beyond it all, there’s that creative knack that makes her efforts with wearable fiber art so attractive. So when we talked to Elena via Twitter and found that she was creating a line of wearable art inspired by the botanical world, up to and including plants seen in The New York Botanical Garden, our interest was piqued.

That was back in early spring. Elena’s since completed her first series of designs based on botanical aesthetics, and was kind enough to talk with me about what it is that pushed her to take up this skill, as well as how the natural world found its way into her work. She even has a few pointers for hopeful creatives looking to pick up a craft for themselves, if not carry their own to the next level.

Because the blending of fashion and nature has become such a choice topic around Plant Talk, you’ll want to keep an eye out for future spotlights on local talent and styles. In the meantime, Elena gives us a glimpse into her modern take on classic techniques.

Tell me a little about yourself–your background, where you’re from. What is it that you create?

I live just a few miles north of the NYBG, in Westchester County on the Eastchester/Scarsdale border. In my home studio I design and make wearable fiber art, or hand-knit and crochet accessories, clothing, and fiber jewelry. I develop new designs and collections throughout the year, and I also take on custom commissions.

What are the methods and materials that you use to create your wearable fiber art, and how is it that you came to be involved in this craft?

I learned to knit and crochet from my mother as a child and did a good deal of needle-craft growing up. I studied other disciplines in college, at Fordham University, and in graduate school at NYU, but found myself drawn back into the world of designing and creating with fiber about five years ago. What used to be a part-time passion while I worked in university administration became a full-time, full-force pursuit a year ago.

My materials can be described as both basic and luxurious. I use bamboo knitting needles and a selection of fine yarns, including merino wool, cashmere, alpaca, and silk. Rather than work from existing patterns, I create my own. I also experiment with stitch combinations in both knitting and crochet. I pay a lot of attention to shape, texture, and drape in my designs, and I strive to include an element of the novel and unexpected in my work.

Your latest series pulls inspiration from the botanical world. Was there a particular moment or image that sparked your interest in basing designs on plants?

The botanical world has been a creative inspiration for a long time. Some years ago, I created a series of black and white photographs that were close-up portraits of plant life. The series “Organic Matter” was shot primarily on the grounds of The New York Botanical Garden and also at Wave Hill, where it was part of a solo exhibition in 2003. This work was also exhibited at Olbrich Botanical Gardens in Madison, WI. In those photographs, I focused on texture, patterns, line, layers, and shapes, much in the same way I now focus on these elements in my fiber work.

The botanical world is a boundless source of inspiration and stimulation, with its undulating forms, symmetry and asymmetry, colors, patterns, and progressions. My work is not exactly representational; rather, especially in my latest fiber jewelry series, I concoct stems, leaves, and blossoms that are whimsical and of their own fantastical species. My hope is that this work resonates with those who appreciate unusual and out-of-the-ordinary jewelry and accessory design.

What role did The New York Botanical Garden play in the designs of your fiber art? 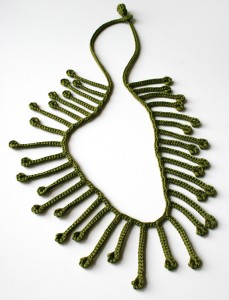 I have spent many, many hours at the NYBG over the years. My family and I visit the Garden during all four seasons. This past spring and early summer, my mother and I spent several glorious afternoons at the Garden, after what was a grueling schedule of travel to and preparation for several major fine craft shows where I presented my work.

On the surface, those afternoons were about slowing down and relaxing, but there was such an abundance of activity all around us–new leaves sprouting, blossoms exploding, grasses swaying. Soon, I began experimenting with new ideas for necklaces, rings, bracelets, all made with pure silk and a very fine crochet hook. I plan to continue the series this fall and present it both online and at fine craft juried retail shows I have coming up in New York City, Connecticut, New Jersey, and Massachusetts.

What is your favorite plant to model off of thus far, and why?

A number of the pieces made this summer are of the algal persuasion. I did spend a good deal of time by the ocean, and there was no shortage of seaweed there. Again, though the connections between plant life and my pieces are evident, the translations are not necessarily literal. It is the layering, interlacing, overlapping features that I’m drawn to, and the ability of these elements to be used in wearable accessories and garments that adorn in unusual ways, and delight both the wearer and the viewer.

Do you have any advice for beginning designers, whether they’re learning to knit or simply hunting for inspiration? 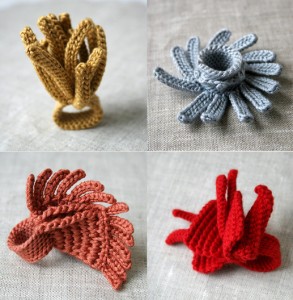 Although I am not a guru by any means, and hope to remain a life-long learner, I do have a few tips. I recommend being open to finding inspiration in unexpected places and at unexpected times. I also recommend exposing yourself to regular doses of great art and fine craft. Do so not for the purpose of imitating others, but to discover what it is in the work of others that appeals to you, draws you in, and stirs you up. You will see trends and patterns emerge that you can then explore in your own creative experiments.

I would also encourage aspiring creatives and enthusiasts to support contemporary artists by visiting not only museums and galleries, but also art and craft shows where you can see the work and meet its creators. Look for juried art and craft festivals in your area, or when you travel; talk to the artists. You will come away enriched in one way or another. There are also several excellent publications out there that art lovers would enjoy. I read American Craft and Fiber Art Now cover to cover. You will be amazed at how essential nature and plant life are as inspiration for artists everywhere.

For more on Elena’s designs, you can visit her website, her Etsy shop–Tickled Pink Knits–or peruse her current collection via her Flickr feed.

How beautiful! I’m a huge fan of Elena’s scarves and love the whimsical jewelry designs.

How wonderful to see Elena featured here! She has been volunteering some time helping me with marketing TAFA: The Textile and Fiber Art List (www.tafalist.com) of which she is a member. It’s been a great pleasure to work with her. When I first saw her work, I was impressed by how clean her lines are and by the textures in her stitches. Her shawls beg to be worn and handled! I find the connection she has made with nature fascinating!

great article on an inspiring artist! I love how Elena looks and sees and adapts shapes and colors into her work! and her fibers and textures beg to be touched!