Posted in Exhibitions, Monet's Garden on October 9 2012, by Sonia Uyterhoeven 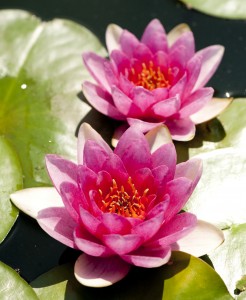 For centuries, water lilies have been thought of as emblems of purity and beauty. Philosophers marveled at how a stunning, symmetrically perfect flower–sometimes with a sweet, subtle perfume–was capable of arising from such muddy waters. But if the pristine blooms and large, glossy lily pads give the illusion of cleanliness, every gardener who has ever reached down into a pond to deadhead a spent bloom will attest to the fact that underneath the façade of exquisite beauty is a slimy mess.

As we approach the end of our Monet’s Garden exhibition (Sunday, October 21), the water lily display–one of the centerpieces of the show–is still in its full glory. But while this exhibition took its inspiration from Monet’s garden at Giverny, the artist found his love of the flower elsewhere. Monet’s water garden was transformed when he met Joseph Bory Latour-Marliac, the son of a wealthy, landowning French family. After studying law in Paris, Latour-Marliac returned to his home near Bordeaux to help his father manage his property. As an avid botanist, he soon developed a vast network with horticultural societies and botanists throughout the world.

The water lily was Latour-Marliac’s unmatched passion. The species that he grew up with were the native, double-flowering white variety, Nymphaea alba, and the rather simple looking Nuphar lutea–a single-flowering, yellow relative of water lilies. His world changed when he was first introduced to tropical varieties, with their vivid purple and blue colors and large, electrifying flowers. Soon after, he set his mind to the task of hybridizing a water lily that combined the beauty of the tropical lilies with the hardiness of the wild European water lilies. 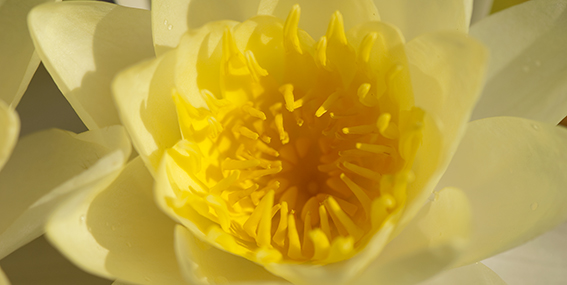 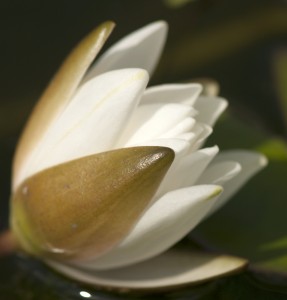 Nymphaea ‘Comanche’ is another one of Latour-Marliac’s hybrids. It is a free-flowering water lily with flowers that start out as a pale apricot and then change to a coppery orange. N. odorata ‘Sulphurea’ is another one of his introductions that has a sweet fragrance and large yellow flowers. It also flowers prolifically and grows from six to eight feet wide.

Water lilies will flower into November in the New York area. Our hardy water lilies will stay in the pool through the winter months. We treat our tropical water lilies as annuals, but it is easy to over-winter the tubers in moist sand, storing them in a cool area.

your blog post is so interesting….very informative…thanks for the reminder that this phenomenal show is ending. So if I understand this correctly, the NYBG plant’s fresh wate lilies in the tropical pool each year? Although, an avid gardner could store the tubers in sand over the winter and get them to bloom again.

Have one more question….how deep is the pool?

One final question which I’ve been dying to ask for months….has anyone ever jumped in to take a macro photo?

The homeowner either has the option of using tropical water lilies as annuals or storing them in damp sand. Store the tubers in damp sand checking them monthly to make sure they don’t dry out. The sand needs to be damp (not wet) and the temperature should be around 50-55 degrees Fahrenheit. Possible storage containers are Ziploc bags, Tupperware or glass containers. It is helpful to dust the tuber with fungicide, but not essential. Some homeowners store tubers in sphagnum moss.

Hi: Thanks so much for your detailed and informative answers. I really appreciate the time you took to provide such a complete overview. Just found out today that the Chrysanthemum show will be in the Nolan Glasshouse. This is so very exciting.

Out of curiousity, what are your favorite flowers and which ones do you enjoy growing?