Posted in Around the Garden on November 7 2012, by Matt Newman 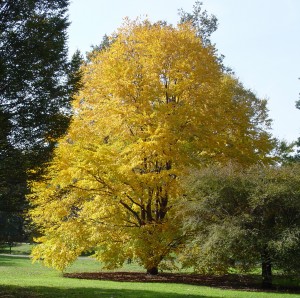 If you’re walking along Garden Way after a trip to the Greenmarket, and you happen to catch a whiff of what smells suspiciously like cotton candy, there’s no need to worry–you’re not losing your mind! Just freeze. Now retrace your steps, maybe a few paces back toward the tram stop. Turn slightly toward the Library Building. At the right time of year, standing in just the right spot and with the wind in your favor, you should be looking at–and catching the aroma of–one of our true gems of autumn foliage.

At the peak of its fall change, the katsura tree (Cercidiphyllum japonicum) is covered in nodding sprays of glowing apricot- and lemon-colored leaves, but what they give off is far and away the prime reason for its fandom. Like certain citrus trees, scooping up a handful of fallen leaves and crushing them in your hands releases a cloud of magnetic fragrance. However, you won’t pick up the pungent, spiced notes of a tropical fruit tree. Instead, you’ll find yourself wondering if you’ve wandered into one of Willy Wonka’s confectionery daydreams. The heart-shaped leaves smell exactly like cotton candy. Or maybe marshmallow fluff. Or caramel, or brown sugar, or vanilla pudding! Whatever this tree smells like to you, it’s seldom that a visitor to the NYBG fails to fall in love with the katsura’s rare talent.

C. japonicum is one of only two members of the Cercidiphyllaceae family, a group that once grew across North America and Europe (“once” meaning “as far back as the Pleistocene era”–not exactly recent). Nowadays, the katsura is considered native to China and Japan, and first found its way back to New York through the nursery seed trade of the Hogg brothers, around the time of the American Civil War. But while the Hoggs have fallen into the annals of history, their quiet legacy has not; in the U.S., the not-entirely-common katsura is planted as an ornamental shade tree, growing to nearly 150 feet tall at its highest and stretching ample branches to around 50 feet from one side to the other. For the home grower aiming to plant one in the yard, rest easy knowing that your katsura probably won’t shoot up any higher than an average of 60 feet.

But if you’re still hung up on growth potential or simply aesthetics, there are several cultivars making the rounds that will suit your planting situation, whether it’s ‘Pendula’s’ sweeping, willowy branches; the dwarf ‘Heronswood Globe’; or the rounded ‘Tidal Wave’. For most varieties, spring foliage will pop up in a rich, deep reddish purple, ripening into a dark emerald before fall brings on the electric yellows and oranges. And, of course, that’s when the candy-coated aroma is at its peak, aggravating your neighbors’ appetite and making you the envy (or enemy, if they don’t have a sweet tooth between them) of the Home Owner’s Association.

Raising a katsura isn’t especially difficult, either. Like any child, it needs more attention as a young plant than it will once it establishes itself. It’s best to site your tree in an area protected from overly harsh wind and weather, while providing a reasonable amount of sun and moist, well-draining soil during dry months; as it ages, it should become more tolerant to drought conditions, though it’s best to err on the side of safety. And even if your green thumb fails you this time around, assuming you have a woody trunk to work with, you can always use the white timber to build yourself a Go board–a common tradition in China and Japan.

If you’re looking for the NYBG‘s katsura along Garden Way, you need only keep your nose in the air. And while it’s moving past its peak aroma at this point in the season, even a hint of that cotton candy scent is unmistakeable. Or marshmallow fluff, if it suits you.

Now, if only we could find trees that smell of popcorn and funnel cakes, we’d have all the justification we need to throw a botanical carnival.

Cutting down a tree (for a variety of reasons) has become an act of brevity. Many times, it is a thoughtless removal without consideration of the investment of years, the beauty and value of the tree. Your new video – presenting the TLC that was presented this lovely tree was interesting, wise and heartwarming. The tree is a beauty and it is wonderful that you had the skills, equiptment and physical labor to transport it, preserve the tree AND TO SHOW OTHERS HOW THIS CAN BE DONE FROM YOUR WEBSITE!
There is something missing from a person who does not love and appreciate a tree…

Hi Stacey. We talked with Sonia Uyterhoeven, our Gardener for Public Education, who came up with a great answer to your question:

Thank you for the question. Katsura trees grow 40-60 feet tall. Some have a pyramidal habit while others are wide spreading, but they all require a lot of space to grow. As such, I have a few concerns here. Katsura trees are difficult to transplant, and planting such large specimens (23 feet) could be fraught with a number of difficulties. Large transplants take a long time to establish and would require staking and close monitoring of water. If they are planted in a site that was damaged by the last storm, they would be vulnerable to storm damage in the coming years. These large specimens would also be extremely expensive.

What I would suggest is to replant the wooded area. If you are trying to create a screen from the neighbors, you could combine a mix of evergreen and deciduous trees. Closer to the lawn and pool, large shrubs such as viburnums could be planted – they grow quickly and, while they are deciduous, they have a dense branch structure. Remember to check the cultivars to see their height, as some are compact. American hollies are a good evergreen choice. I am not sure where you are located, but have a look at larger trees that do well in the neighborhood and in the surrounding area. This will give you some ideas on what will work well in a small woodland area.

We all have different experiences, but my thought on transplanting large trees is that it is extremely expensive and the success rate is highly variable. If there is an existing woodland in the ¼ acre – no matter how damaged – cleaning it up and replanting the area to recreate a woodland area might be the best option to create a privacy screen. Mixed plantings often form the most effective screens, and you can play with different heights so that your own yard isn’t consumed with shade.