The Magnetic Appeal of Pansy Orchids

Posted in Gardening Tips on March 26 2013, by Sonia Uyterhoeven 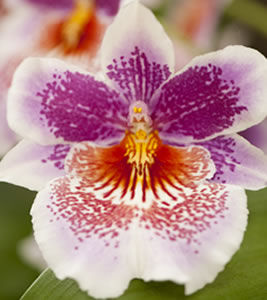 There are a number of orchids that seem to draw the crowds at The Orchid Show better than others: The pansy orchid (Miltonia) is one of them. This cheery flower–as the name suggests–has a broad open bloom that looks like a cross between a pansy and a butterfly, often bearing the etchings of a face or waterfall markings that cascade down its lip (Labellum).

Miltonias are actually two genera: Miltonia and Miltoniopsis. Don’t worry, I am not going to digress into a technical discussion; rather, I am raising the distinction so you understand that they can flourish in your home with the proper care. Miltonia and Miltoniopsis were once clumped together–now they are separated–but people still refer to all of them as Miltonia. In this day and age there are so many hybrids out there that, unless you are specifically searching for a species, you probably have a little bit of both in your orchid.

The genus Miltonia comes from Brazil and they are often referred to as the Brazilian miltonias. They are a good beginner orchid that is related to Oncidium. They like intermediate to warm temperatures, bright indirect light, average to above average humidity, and a medium to fine grade orchid planting mix. The flower has small, pointy petals and sepals with a large lip. It has a spiky, uppity appearance to it. The growth of the orchid matches the personality of the blossoms–it has a rambunctious rhizome that stretches out and consumes a pot quite quickly.

Miltoniopsis are the orchids with the pansy-like flowers. It is the demure cousin of the Brazilian miltonias. It can be found in nature in the Peruvian Andes. Indigenous to cool cloud forest, this orchid demands high humidity, intermediate to cool temperatures, and medium levels of light. While Miltonia likes to stretch out on its rhizome, Miltoniopsis is a compact grower. The fine roots on this orchid fare best in a fine bark mix or a combination of sphagnum moss and fir bark chips. 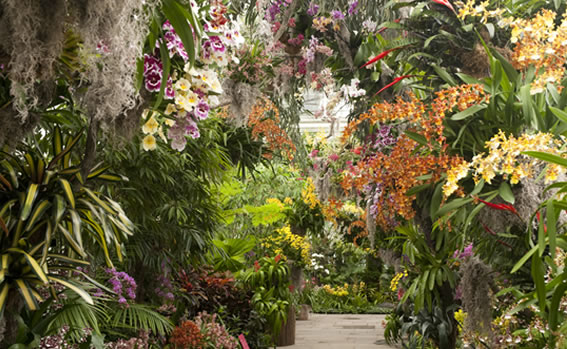 Hybridizers have combined the tough growing warmer genus with the more temperamental cool growing cousin to produce cultivated varieties that are more adaptable to the home environment. Since orchids are notorious for their promiscuity, the two genera have been complicit in this endeavor. Understanding their growing requirements in their natural environment helps us to become better parents for these exotic additions to our homes.

Most of the Miltonia that you find from specialty growers will have more Miltoniopsis in it so that the result is a beautiful pansy-like flower which incidentally has a nice mild fragrance that sometimes smells like rosewater and at other moments, morphs into fresh cucumber (just my opinion). 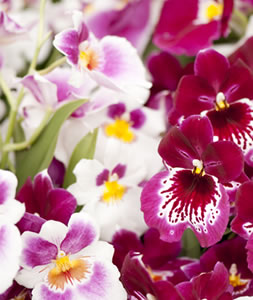 The pansy orchid flowers in the spring into summer and will sometimes flower again in early autumn; flowering lasts for 3-4 weeks. The golden rule for any pansy orchid is to not let it get too warm–particularly in the summer when temperatures rise–and not to dry. Your pansy orchid will start to sulk if the temperatures get over 80° (it may not flower for you). The best container to grow the orchid in is a plastic pot that will maintain even moisture–it doesn’t like the mix to be soggy but it doesn’t like to dry out.

Miltoniopsis is a salt-sensitive orchid so a consistent low level fertilizing regime–a 1/4 strength dilution every other week–is best making sure to flush out the pot on a monthly basis to remove any unwanted residues. Protect the orchid’s thin foliage from hot sun by giving it diffuse light–an eastern or a southern exposure with a sheer curtain will be fine–a southern window in winter time when light levels are lower will work. Divide the orchid late in the summer when the new growth is 2-4 inches tall and the roots are starting to grow. If you have an orchid that is heavy on Miltoniopsis parentage, don’t use it as a cut flower–it will simply wither and fade before your eyes.

So remember, it your orchid has beautiful pansy-like blooms, its ancestors were from cool cloud forests and it will demand even moisture and temperatures on the cooler side. The gift of hybridization is that your home doesn’t have to feel like a cloud forest–hybridizers have given you more wiggle room so that you can grow these orchids happily in your home.

Would you like to care for orchids at home but don’t know where to start? Saturdays and Sundays at The Orchid Show feature orchid-care demonstrations with Sonia and orchid Q&As at Shop in the Garden where orchid experts can help you pick out the orchid best suited to your unique home environment!