The Amazon Water Lily: Adapted to the River’s Rise and Fall

Scott A. Mori is the Nathaniel Lord Britton Curator of Botany at the The New York Botanical Garden. His research interests are the ecology, classification, and conservation of tropical rain forest trees.  His most recent book is Tropical Plant Collecting: From the Field to the Internet.

The waters of the Amazon fluctuate as much as 45 feet in years of heavy rainfall, meaning plants growing along the river are alternately subject to flooding in the wet season and dry soils in the dry season. To tolerate these extreme habitats, some Amazonian plants have evolved adaptations to both situations. A perfect example is the Amazon water lily (Victoria amazonica), which has adjusted its annual life cycle to the rise and fall of the rivers by growing rhizomes and new leaves from seeds, flowering at high water, fruiting as the water recedes, and surviving low water levels as seeds—each one surrounded by an impervious seed coat that protects against desiccation.

However, despite all of its miraculous adaptations, my focus falls on the fascinating interactions this amazing plant has with the beetles that pollinate its flowers, as well as the water that disperses its seeds. This incredible life cycle is only one of countless plant/animal interactions that occur in all habitats of the world—and these interactions contribute disproportionately to the high diversity of plants and animals in the tropics.

In order to protect the leaves needed to produce the photosynthate required to form flowers and seeds, the Amazon water lily has sharp prickles growing along the veins which run along the underside of the large, round leaves. These leaves are also characterized by their upturned edges. Although the prickles do not deter insect predation, they dissuade mammals such as manatees from munching on the leaves, a destructive activity that limits the plant’s ability to manufacture flowers and seeds.

Although it has long been known that beetles frequent the flowers of the Amazon water lily, the details of this interaction were not studied until 1976 by Ghillean T. Prance (former Vice-President of Science at NYBG). He and his colleagues discovered that the white flowers emit a pleasant aroma at dusk which, combined with their white color, attract large scarab beetles. The principal beetle pollinator turned out to be a new species to science subsequently named Cyclocephala hardyi. 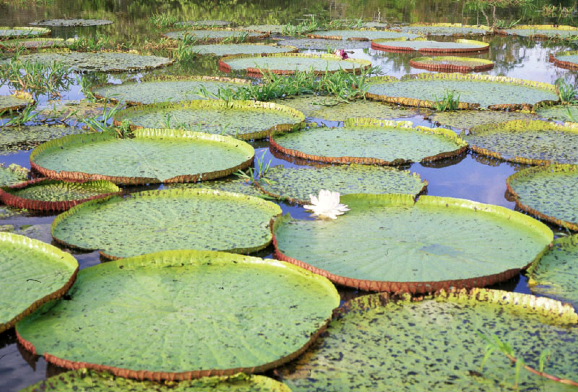 ◄ Back
Next ►
Picture 1 of 5
Leaves showing the upturned margins and a first day flower. Photo by S. A. Mori.

Prance’s team noted that the temperature within the flowers was about 15 degrees Fahrenheit higher than ambient temperatures and that the higher temperature volatilized the aromas that attracted the beetles. Later in the evening, the flowers closed and trapped the beetles inside through the night and most of the next day. By the next morning, the anthers had opened and the beetles became dusted with pollen while feeding on the fleshy staminodes. By the evening of the second day, the flowers had turned red, no longer produced aroma, and opened for the second time. This allowed the beetles to escape and fly off to another first day, white-flowered plant, where the pollen on their bodies rubbed off onto the stigmas.

The movement of pollen from one flower to another is called pollination. Prance’s team also observed that the stigma was receptive to pollen only in the first evening’s flowers. The pollen germinates on the stigma and produces a pollen tube that carries the sperm to the egg, where fertilization occurs. This process results in the formation of an embryo and the development of seeds. When the stigma is receptive at a different time than when pollen is released, it is called protogyny, which ensures cross-pollination. This process enhances genetic diversity, and ensures that plants have the genetic variation necessary for them to adapt to changes in their environment.

Although the beetles are originally attracted to the flowers by color and aroma, they are rewarded for their efforts by food in the form of succulent staminodes, a warm and safe place for them to spend the night, and a chamber in which they can mate; thus, both the plant and the beetles benefit by this mutualistic relationship.

After pollination, the flowers are pulled under water by their contracting stalks and remain submerged until the seeds are mature. After the seeds are ripe, the remaining part of the flower disintegrates and the seeds float to the surface, aided by the buoyant air sac that surrounds each one. The seeds are carried away by the receding waters of the Amazon, and, as the waters continue to fall, they become lodged in the mud where they pass the rigors of the dry season. During the following rainy season, the seeds germinate and grow into the next season’s plants, thus initiating the annual life cycle of the Amazon water lily—a process that takes place in harmony with the rise and fall of the Amazonian River.

wow…this botanical story is so very interesting and the photos are beautiful…read it twice….thanks