They are the dragonflies and damselflies, known scientifically as Odonata. It is amazing what diversity already exists around the wetland in the Native Plant Garden. They are stunning to watch, but try photographing them and you may end up cursing them. Some species do occasionally land, but others, especially the larger ones, may stay aloft on the prowl all day. In flight they are constantly in search of prey while avoiding being preyed upon by other dragonflies and birds. This means their flight is very erratic and can turn on a dime by moving all four wings independently, and even hover or go backwards. The more you watch them, or photograph them, the more fascinating they become, and soon you will notice the different species and their different behaviors, and who knows? You may even become an odophile.

Here is a sampling of some of the species, at least the ones I’ve been able to capture in the lens so far. 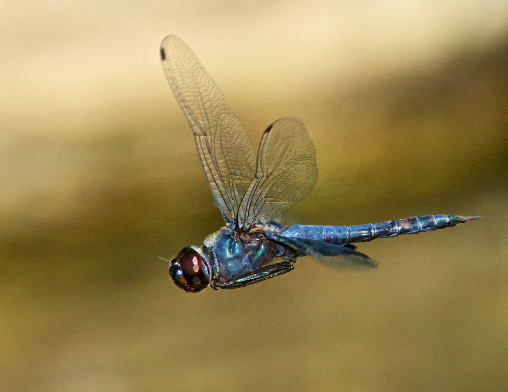 Next time: some other denizens of the Native Plant Garden.

Hi Tom:
…your photos of the dragonflies are really amazing…it is hard to pick a fave because all of them are really incredible…went thru the slideshow three times
and finally decided that the twelve spot female with sheer wings against greenery was my fave for total beauty. Do you have one you prefer or do you love them all? Actually, I love them all:)

Thank you so much for taking all the time to get these perfect photos and share them w/us.

Thank you, Barbara. My favorite is always the one that got away before I was able to photograph it! I do like how the Saddlebags hover and give me a chance to photograph them in flight.