Posted in Gardening Tips on July 9 2014, by Sonia Uyterhoeven 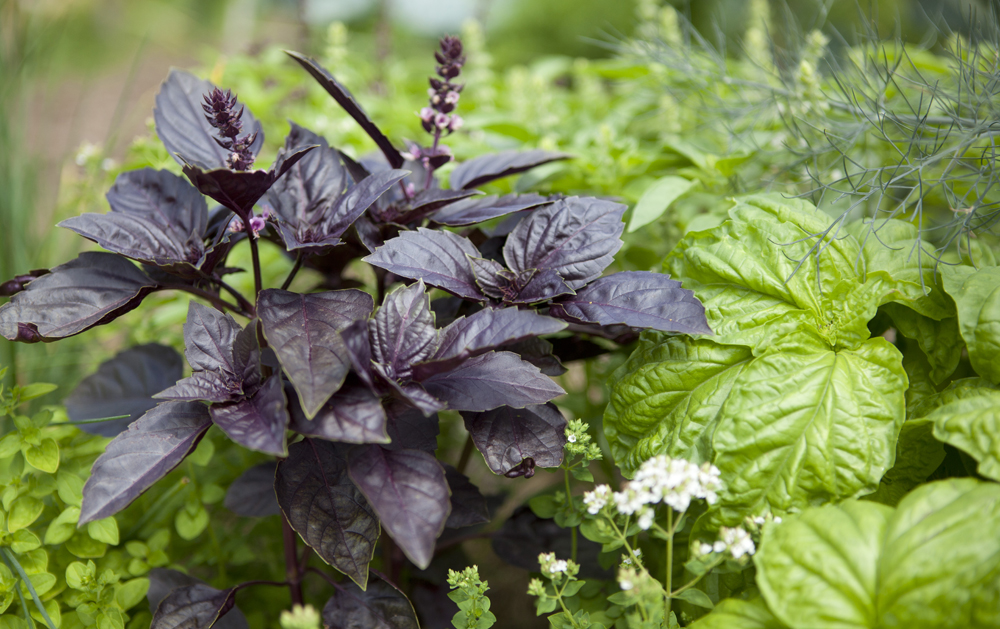 Influenced by our culinary experiences, many of us likely think of basil (Ocimum basilicum) as originating in Italy. However, you might be surprised to find that this popular culinary herb is actually endemic to India, where it then spread to Asia, Africa, and Europe.

Basil is simple to sow from seed, and a cheap and easy way to include delicious diversity into your garden. We often combine several different types of basil together for an attractive display in the herb garden, vegetable garden, and sometimes a mixed border. But because basil is sensitive to frost, it is important to wait until the weather has warmed before it’s placed outdoors.

I have been a big fan of purple basil for years. It looks lovely in the garden, pairs beautifully with scented geraniums and pot marigolds (Calendula), and adds delicious flavor and color to any meal. It’s one of my favorite herbs when making herbal vinegars since it dyes the vinegar such a lovely color.

Of the purple basils available, my favorite is easily ‘Red Rubin’. It’s a vigorous grower that can reach between 18 and 24 inches tall. The leaves range from deep purple to a nice copper color. ‘Osmin Purple’, on the other hand, is one of the darkest purples on the market these days. It’s not as robust as ‘Red Rubin’, reaching around 16 to 20 inches tall, but has always performed well in the garden. Try different varieties of purple basil each year to find your favorite. Some purple varieties have a percentage of green foliage so that you end up with a bi-colored look.

If you have never tried lemon basil, then you’re in for a real treat. ‘Mrs. Burns’ Lemon’ and ‘Sweet Dani’ are two varieties that I’ve grown successfully, each of which I very much enjoyed. The foliage on citrus-flavored basil is smaller, but it makes a handsome addition to your garden, with a flavor and fragrance that can only be called phenomenal. 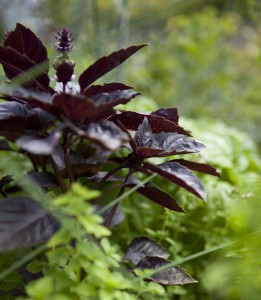 For a spicy treat, try the Thai or cinnamon basils. They have an anise-clove flavor and fragrance that offers a twist on traditional basil. Last year, we grew Thai ‘Siam Queen’. Like the cinnamon basil and other Thai basils, it has attractive purple stems. ‘Siam Queen’ also sported a lovely flower with big purple calyces and soft lavender blooms.

In general, it is best to cut your basil back just before it blooms to ensure the best flavor and vigorous foliage. Once the basil starts to bloom, it channels its energy into flowering and creating seeds rather than fresh new growth.

‘African Blue’ basil is one notable exception. This tender perennial is a sterile hybrid, so the flowers are not expending energy in seed production. You propagate it by taking cuttings. The plant behaves like it wants to be a tropical salvia, growing to four feet tall with dark green foliage, purple stems, and statuesque flowering spikes that are covered with mauve and white flowers. It’s a magnet for bees. ‘African Blue’ has a camphor scent and can be used for cooking or as a lovely ornamental addition to your garden.

Other ornamental basils that may find their way into the kitchen are ‘Cardinal’ and ‘Magic Michael’. Both varieties sport large flowers that give them the appearance of a celosia rather than an herb. ‘Cardinal’ has cerise-colored blooms and ‘Magic Michael’ has sturdy purple calyxes that are offset by white blooms. The former grows 24 inches tall, while the latter remains compact at 15 inches.

For those who love Italian basil, or traditional basils, ‘Genovese’ is the standard fare. ‘Nufar’ is a large-leaved variety with an exquisite and often sweet taste. On the opposite end of the spectrum, I adore the tiny bush basils such as ‘Spicy Globe’. You can plant a wonderful border that mimics boxwood with these adorable varieties, and I like to toss them directly into my salads for fantastic flavor.

As you can tell, I rarely meet a basil that I don’t like. I derive an enormous amount of satisfaction from starting them from seed, watching them grow, and reaping the harvest all summer long.