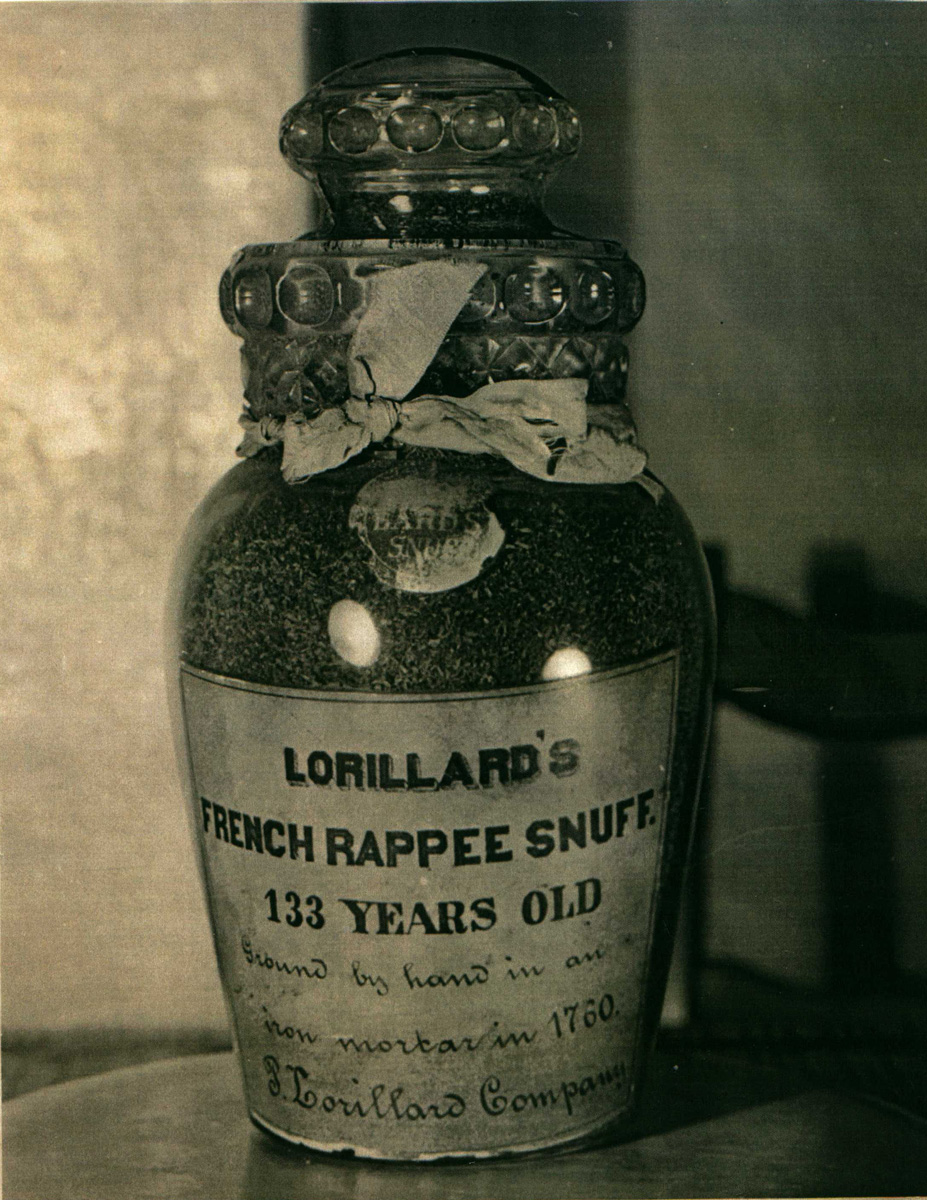 The Lorillards won first prize at the fair for their exhibit which featured the same jar presented to the Garden, the contents of which are stated to have been ground in an iron mortar by family founder Pierre Lorillard (1742–1776) himself in 1760, the year he opened his first shop on Park Row in lower Manhattan. Pierre opened his first mill on the Bronx River in 1808. That wooden mill was replaced by the current stone version around 1840 and at the same time a country house was constructed as well. While the house is no longer extant, the historic mill has been renovated and is listed on the National Register.

Strangely enough, the owner of the jar of Lorillard snuff kept the jar stored in an old cardboard canister of Quaker Oats. The design of the canister can be dated to 1915 when Quaker first started to market its product in cylindrical packaging. Moreover, this canister itself has an important link with the Garden for it was here that the process for puffing cereals was first discovered in 1901 by garden scientist Alexander P. Anderson.

I despise anything dealing with tobacco – however this is a super story. It is marvelous that the lady was so generous in returning the unique, aged Jar. It was an added feature that it was still brimming with the origional product. This will help the gardens continue to explain the history of the location and the personalities along the way.
The tie-in with the cardboard oats container is also a delight. You double-dipped in ‘Good Luck’ with this feature too! The ole Quacker Box is an outstanding part of this story.
I hope this inspires others to not just admire the place, but to join in helping collect the missing links to the story and donate so everyone can benefit for decades into the future.

This is great! Now we can add this to the list of cool items the Garden has in its possession, right along with the sample taken by Charles Darwin.

By way of clarification, Lorillard began operations on the NYBG site in 1793, one year after purchasing an already existing, one-wheel mill. In 1800 they built the large wooden mill 900 feet south of the current dam (which was also erected in 1800), followed in 1840 by the construction of the existing stone mill. Both the second mill and the third mill operated simultaneously until the business vacated the property in 1870.

The Lorillard mansion “Bronxdale” was built about 1850 by Peter Lorillard III. The house burned in 1923.