The Institutional Archives of The New York Botanical Garden preserves and documents the activities of the Garden as an important international cultural and research organization dedicated to the research, education and display of plants. From its inception in 1891 to the present day, the records of the organization have been gathered and organized and are often consulted for historical and scholarly research. These records are related to the general administration and activity of the Garden, its Directors and Presidents, Board of Trustees, Collections, Buildings, and Gardens. These materials document not only the scientific legacies of the Garden and its staff, but also the social interactions and professional achievements of NYBG researchers. The records of Bassett Maguire (1904–91) is one such collection of note.

Posted in From the Library on April 24 2019, by Stephen Sinon

Stephen Sinon is the William B. O’Connor Curator of Special Collections, Research & Archives, of the LuEsther T. Mertz Library at NYBG.

The Botanic Garden, published in 1792, is a set of two poems, “The Economy of Vegetation” and “The Loves of the Plants,” both written by Erasmus Darwin (1731–1802); grandfather of the more famous Charles Darwin (1809–1882). The first celebrates technological innovation, scientific discovery and theory. The second and more popular poem promotes and explains the Linnean system of plant classification.

One of the first popular science books, the intent of The Botanic Garden was to pique popular interest in science. By embracing Linnaeus’s sexualized language, Darwin intended to make botany interesting and relevant to the readers of his time. While many Englishmen of the time were scandalized by the sexual nature of Linneaus’ taxonomic system, Darwin openly embraced it, using suggestive images in his floral descriptions, writing of blushing virgins, handsome swains, and deceitful paramours.

He emphasized the connections between humans and plants, arguing that they are all part of the same natural world and that sexual reproduction is central to evolution. His attempt to convey the wonders of scientific discovery and technology through poetry helped create a tradition of popular science writing which continues today.

Preserving the Legacy of Lord & Burnham

The Lord and Burnham Co. was the premier builder of glasshouses in 19th- and 20th-century America. The firm was a natural choice for the founders of The New York Botanical Garden to turn to as they commissioned the design and construction of the largest and finest conservatory in America, the Enid A. Haupt Conservatory, which remains the centerpiece of the Garden today. Lord and Burnham constructed glasshouses for many well-known private clients, schools, parks, and botanical gardens across the country, but they never built anything larger than the Haupt Conservatory, which features a 90-foot central dome and one acre under glass.

The original plans and drawings for the Haupt Conservatory can be found in the Garden Archives along with architectural plans for 140,000 other clients which form part of the surviving business records of the Lord and Burnham Co.

Posted in From the Library on April 23 2012, by Stephen Sinon 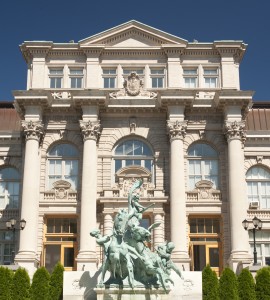 The LuEsther T. Mertz Library is revered as a center for research in the fields of botany, horticulture, and landscape. However, it is also home to many interesting special collections which are less well-known, such as its 1,600 volume children’s collection. This collection contains books which were written for children and young adults, and its content ranges in date from the 1880s to the present. Some of these publications are great rarities, while others are illustrated by famous artists, or explain scientific, natural, or ecological principles; some pieces of the collection are story books, others are picture books, but each is made to be read and admired by children of any age.