The Corpse Flower: A Decade in the Making

Posted in Horticulture on July 29 2016, by Marc Hachadourian

Marc Hachadourian is the Director of The New York Botanical Garden’s Nolen Greenhouses for Living Collections. 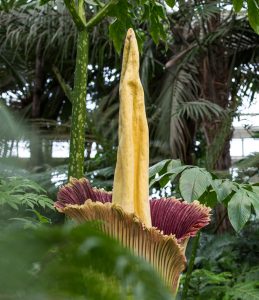 As a kid growing up in Northern New Jersey I was fascinated with biology and the diversity of nature. The idea of plants that catch and devour insects, trees thousands of years old reaching up like sky scrapers, and plants developing an army of vicious spines as defense was irresistible. I read as much as I could find about strange and unusual plants. I distinctly remember seeing an illustration and a description about a plant with a flower as large as a human, one that took ages to reach blooming size, smelled like rotting flesh, and looked like it came from outer space—it all seemed too wild to be true.

The blooming of Amorphophallus titanum has been one of the “holy grails” of botanical garden horticulture since the first plants were coaxed into bloom by gardeners nearly a century ago. First recorded by science in 1878, I can only imagine what botanists thought upon seeing the inflorescence for the first time. Anyone who has seen reports or images of the plant in flower would agree these plants look more like photographic trickery than reality. Often described as a “once in a lifetime event,” it is no wonder that when a plant of the Corpse Flower blooms it creates a sensation, with people flocking to see it with their own eyes.

The specimen we have on display in the Haupt Conservatory began as a humble seedling which I received, among several others, in 2007. Since that time, the Nolen Glasshouses staff and I have been tending to the plant, seeing it to maturity and a hopeful bloom in a controlled climate not unlike the one it would have in its native Sumatra. Each year the plant’s tuberous underground corm, a root structure which can weigh up to 200 pounds, sends up an enormous, branching leaf to gather energy for a future flowering (a phenomenon you can see in the sister plant to the right of the flowering specimen in the Conservatory). After nearly 10 years, that flowering has arrived. 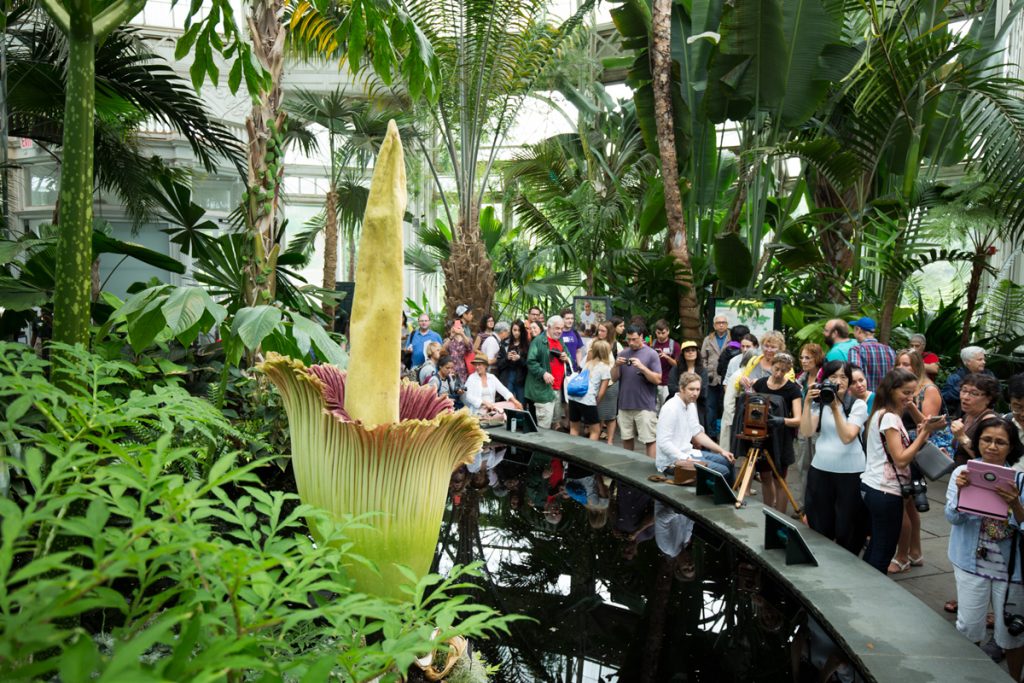 After spotting the developing bud in the greenhouse on July 15, I have eagerly anticipated the opening of this flower and the resulting fragrance no matter how unpleasant the descriptions of the scent may sound. I am sure that I will not be alone in my appreciation, and I’m ecstatic to share this moment with all those who come to see and smell it now that the plant has opened. Finally being able to stand face to face with this vegetable monster is a moment I have been thinking about for quite a long time.

What a warm and informative posting.
Thank you, Marc, for all you do!

Congratulations! Now, what is the NYBG plans for after the bloom? Are youngoing to propagate the seeds and grow more of them?